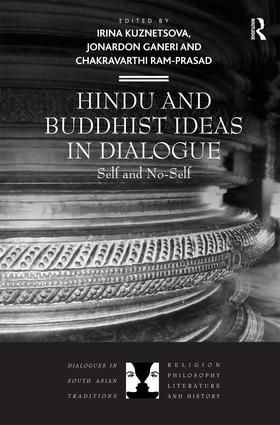 Hindu and Buddhist Ideas in Dialogue

Self and No-Self, 1st Edition

The debates between various Buddhist and Hindu philosophical systems about the existence, definition and nature of self, occupy a central place in the history of Indian philosophy and religion. These debates concern various issues: what 'self' means, whether the self can be said to exist at all, arguments that can substantiate any position on this question, how the ordinary reality of individual persons can be explained, and the consequences of each position. At a time when comparable issues are at the forefront of contemporary Western philosophy, in both analytic and continental traditions (as well as in their interaction), these classical and medieval Indian debates widen and globalise such discussions. This book brings to a wider audience the sophisticated range of positions held by various systems of thought in classical India.

'…this book is the most systematic and philosophically adept comparative text from a Hindu perspective that this reviewer has ever read… This important volume is indispensable for those wanting an in-depth look at the diverse notions of self within the classical Hindu traditions, and the relations they have to Buddhist thought. It is also necessary reading for those studying notions of self from a Western philosophical perspective. Summing Up: Highly recommended. Upper-level undergraduates and above.' Choice 'This important book breaks new ground in cross-cultural philosophy. Over many centuries, Hindu and Buddhist philosophers engaged in sophisticated debates about the existence and nature of the self. These debates are highly relevant to contemporary philosophy of mind and cognitive science, for they contain rich analyses of memory, self-consciousness, embodiment, agency, and emotion. For anyone wanting to understand the Indian debates about selfhood and consciousness, and their significance for philosophy and cognitive science today, this book is essential reading.' Evan Thompson, University of Toronto, Canada ’This is perhaps the most important work to emerge in recent times on Hindu and Buddhist understandings of the self� (or of its absence!) not only for the range and sophistication of its treatment but also as a study to which exponents of Western philosophy must return again and again if they wish to engage in dialogue with the subtle, complex and instructive notions of self and personal identity offered by Indian thought. With this publication, the dialogue can now come of age.’ Julius Lipner, University of Cambridge, UK '[This volume has] intricate and erudite content […] which, alongside earlier work by scholars such as Claus Oetke and Alex Watson, provide an outstanding contribution to scholarship on the atman debate… [A] landmark publication.' Journal of Hindu Studies

Contents: Introduction, Chakravarthi Ram-Prasad; Senses of self and not self in the Upanisads and Nikayas, Brian Black; Why didn't Siddhartha Gautama become a Samkhya philosopher, after all?, Marzenna Jakubczak; Self, consciousness and liberation in classical Samkhya, Mikel Burley; Buddhist no-self: an analysis and critique, Jonardon Ganeri; Emotions: a challenge to no-self views, Irina Kuznetsova; Uddyotakara's defence of a self, John Taber; The abode of recognition: memory and the continuity of selfhood in classical Nyaya thought, Douglas L. Berger; Self and memory: personal identity and unified consciousness in comparative perspective, Chakravarthi Ram-Prasad; Action, desire and subjectivity in Prabhakara Mimamsa, Elisa Freschi; On the Adviatic identification of self and consciousness, Wolfgang Fasching; Luminosity, subjectivity, and temporality: an examination of Buddhist and Advaita views of consciousness, Matthew MacKenzie; Arguing from synthesis to the self: Utpaladeva and Abhinavagupta respond to Buddhist no-selfism, Arindam Chakrabarti; Indian philosophy and the question of the self, Ankur Barua; Bibliography; Index.

Face-to-face conversation and dialogue are defining features of South Asian traditional texts, rituals and practices. Not only has the region of South Asia always consisted of a multiplicity of peoples and cultures in communication with each other, but also performed and written dialogues have been indelible features within the religions of South Asia; Hinduism, Buddhism, Jainism, Sikhism and Islam are all multi-vocal religions. Their doctrines, practices and institutions have never had only one voice of authority, and dialogue has been a shared tactic for negotiating contesting interpretations within each tradition.

This series examines the use of the dialogical genre in South Asian religious and cultural traditions. Historical inquiries into the plurality of religious identity in South Asia, particularly when constructed by the dialogical genre, are crucial in an age when, as Amartya Sen has recently observed, singular identities seem to hold more destructive sway than multiple ones. This series approaches dialogue in its widest sense, including discussion, debate, argument, conversation, communication, confrontation and negotiation. Opening up a dynamic historical and literary mode of analysis, which assumes the plural dimensions of religious identities and communities from the start, this series challenges many outdated assumptions and representations of South Asian religions.