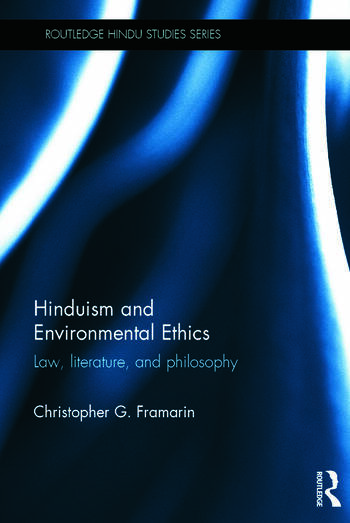 Christopher G. Framarin is Associate Professor in the Department of Philosophy and Department of Religious Studies at the University of Calgary, Alberta, Canada. He is the author of Desire and Motivation in Indian Philosophy, also published by Routledge.

‘In this study of environmental ethics in Hinduism, Framarin assesses ways in which legal, epic, and philosophical literatures of India assert that animals and plants merit moral standing. The tools of reason, narrative, and spiritual affectivity combine in this important study to elucidate key methods and approaches to decision-making found in Hinduism even today.’

"Environmental philosophy is a global matter and hence it is appropriate that it should draw on a global variety of philosophical traditions. Framarin’s new book is a study of Hindu environmental ethics focused on three key Sanskrit texts (Manusmṛti, Mahābhārata,

Yogasūtra.) The central question addressed is whether the Hindu tradition attributes direct moral standing to plants and animals.

Framarin’s original arguments for an affirmative answer and his nuanced criticisms of rival interpretations should be of interest to environmental philosophers everywhere."

"This is an important new contribution from a scholar who has already established an impressive track record in the field.  It takes a sophisticated environmental ethics approach to seminal Hindu texts, breaking new ground, especially on the question of the moral standing of non-human life.  A must-read for anyone wishing to understand Hindu attitudes toward the natural world."