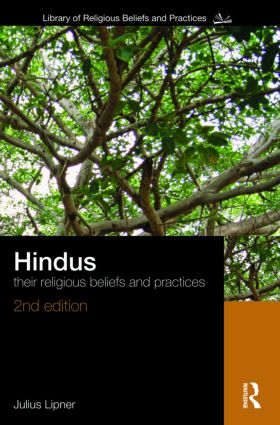 Julius Lipner’s Hindus is widely recognised as essential reading for everyone wishing to understand one of the world’s great religious traditions. Hinduism comprises the religion and culture of the great majority of the people of India, a country tipped to become a world superpower politically, economically and culturally in the course of the present century. The vast array of diverse beliefs and practices usually described as ‘Hindu’ has been notoriously difficult to corral under a single regulating theme. Julius Lipner provides not only a wide-ranging introduction to Hindu religious and cultural diversity but also suggests a way to characterize Hinduism as a distinct tradition that has survived and adapted to changing circumstances from ancient times to the present day. Lipner is a recognised authority on Hinduism's polycentric emphasis, and his book is based on a lifetime of research and personal experience of his subject.

In this thoroughly revised and substantially enlarged second edition, students of Hinduism will find more coverage of the debate about Hindu origins, the nature and practice of Hindu worship, the role of women, the scope of dharma and morality, Hindu philosophical thought and the use of reason, and the way caste functions.

'A landmark in the study of the Hindu traditions when it was first published, Julius Lipner’s Hindus is now even more outstanding. It incorporates the results of recent research (much of it by the author himself) in a substantially expanded and revised text, which brings clearly to the fore Lipner’s illuminating understanding of the Hindu traditions as polycentric. More than ever this book is essential reading for anyone interested in them.' - John Brockington, University of Edinburgh, UK

Julius Lipner is Professor in Hinduism and the Comparative Study of Religion at the University of Cambridge. He was born and brought up in India where he experienced and learned about Hinduism at first hand. Among his books are The Face of Truth (on Ramanuja), Hindu Ethics: Purity, Abortion and Euthanasia; and Brahmabandhab Upadhyay: the Life and Thought of a Revolutionary. He is the author of the keynote article in The Hindu World (Routledge 2004), ‘On Hinduism and Hinduisms’.

The Library of Religious Beliefs and Practices