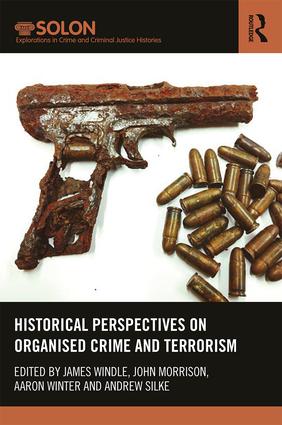 In recent years, in the context of the War on Terror and globalization, there has been an increased interest in terrorism and organized crime in academia, yet historical research into such phenomena is relatively scarce. This book resets the balance and emphasizes the importance of historical research to understanding terrorism and organized crime.

This book explores historical accounts of organized crime and terrorism, drawing on research from around the world in such areas as the USA, UK, Ireland, France, Colombia, Somalia, Burma, Turkey and Trinidad and Tobago. Combining key case studies with fresh conceptualizations of organized crime and terrorism, this book reinvigorates scholarship by comparing and contrasting different historical accounts and considering their overlaps. Critical ‘lessons learned’ are drawn out from each chapter, providing valuable insights for current policy, practice and scholarship. This book is an indispensable guide for understanding the wider history of terrorism and organized crime. It maps key historical changes and trends in this area and underlines the vital importance of history in understanding critical contemporary issues.

2. ‘A citadel of crime’: Saint Paul, Minnesota, and the O’Connor System (James A. Densley)

5. 'He just wasn’t the bloke I used to know': social capital and the fragmentation of a British organised crime network (James Windle)

7. The Klan is history: a historical perspective on the revival of the far-right in ‘post-racial’ America (Aaron Winter)

11. Jamaat-al-Muslimeen: the blurred lines between organized crime and terrorism in Trinidad and Tobago (Andrew Silke)

John F. Morrison is Reader in Criminology and Criminal Justice and Director of the Terrorism and Extremism Research Centre (TERC) at the University of East London.

Aaron Winter is Senior Lecturer in Criminology and Criminal Justice at the University of East London.

Andrew Silke is Professor of Terrorism, Risk and Resilience at Cranfield University.