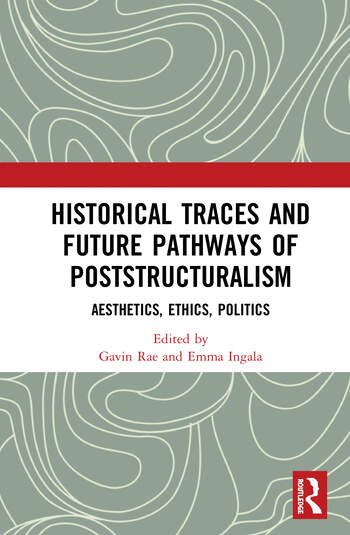 This volume brings together an international array of scholars to reconsider the meaning and place of poststructuralism historically and demonstrate some of the ways in which it continues to be relevant, especially for debates in aesthetics, ethics, and politics.

The book’s chapters focus on the works of Butler, Deleuze, Derrida, Foucault, Irigaray, Kristeva, Lacan, and Lyotard—in combination with those of Agamben, Luhman, Nancy, and Nietzsche—and examine issues including biopolitics, culture, embodiment, epistemology, history, music, temporality, political resistance, psychoanalysis, revolt, and the visual arts. The contributors use poststructuralism as a hermeneutical strategy that rejects the traditional affirmation of unity, totality, transparency, and representation to instead focus on the foundational importance of open-ended becoming, difference, the unknowable, and expression. This approach allows for a more expansive definition of poststructuralism and helps demonstrate how it has contributed to debates across philosophy and other disciplines.

10. Kristeva’s Wager on the Future of Revolt

Gavin Rae is Senior Research Professor at the Universidad Complutense de Madrid, Spain. He is the author of six monographs, the most recent of which are Poststructuralist Agency (2020); Critiquing Sovereign Violence (2019); and Evil in the Western Philosophical Tradition (2019); and the co-editor (with Emma Ingala) of The Meanings of Violence: From Critical Theory to Biopolitics and Subjectivity and the Political: Contemporary Perspectives, published by Routledge.

Emma Ingala is Senior Lecturer in the Department of Logic and Theoretical Philosophy at the Universidad Complutense de Madrid (UCM), Spain. She specializes in poststructuralist thought, political anthropology, feminism, and psychoanalysis, and is the co-editor (with Gavin Rae) of The Meanings of Violence: From Critical Theory to Biopolitics and Subjectivity and the Political: Contemporary Perspectives, both published by Routledge.