Historicising the Women's Liberation Movement in the Western World
1960-1999 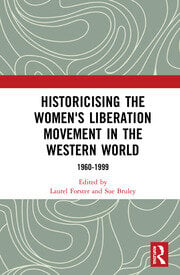 Historicising the Women's Liberation Movement in the Western World: 1960-1999

The Women’s Liberation Movement (WLM) of the late 1960s, 1970s and 1980s emerged out of a particular set of economic and social circumstances in which women were unequally treated in the home, the workplace and in culture and wider society. As part of the WLM, women collected together in disparate groups and contexts to express their dissatisfaction with their role and position in society, making their concerns apparent through consciousness-raising and activism.

This important time in women’s history is revisited in this collection, which looks afresh at the diversity of the movement and the ways in which feminism of the time might be reconsidered and historicised. The contributions here cover a range of important issues, including feminist art, local activism, class distinction, racial politics, perceptions of motherhood, girls’ education, feminist print cultures, the recovery of feminist histories and feminist heritage, and they span personal and political concerns in Britain, Canada and the United States. Each contributor considers the impact of the WLM in a different context, reflecting the variety of issues faced by women and helping us to understand the problems of the second wave. This book broadens our understanding of the impact and the implication of the WLM, explores the dynamism of women’s activism and radicalism, and acknowledges the significance of this movement to ongoing contemporary feminisms.

The chapters in this book were originally published as a special issue of Women’s History Review.

1. Etchings from the Attic: looking back at feminist print-making from the 1980s Lisa Taylor

4. White Women, Anti-Imperialist Feminism and the Story of Race within the US Women’s Liberation Movement Say Burgin

8. Fighting for Recovery: foremothers and feminism in the 1970s Janet Floyd

Laurel Forster is a Senior Lecturer at the University of Portsmouth, UK, where she researches women’s cultural history and media representations of gender. She has published on gender politics and activism, war zones and the domestic sphere, and literary modernism. Her recent book, Magazine Movements: Women’s Culture, Feminisms and Media Form (2015), reflects her specialism in periodicals. Her current projects include a study of political magazine cultures and a history of British Women’s Print Media.

is a Reader in Modern History at the University of Portsmouth, UK. She specialises in women and gender relations in twentieth-century Britain, particularly in regard to oral testimony. Her last book was The Women and Men of 1926, The General Strike and Miners’ Lockout in South Wales (2011). She is currently leading a project recovering oral feminist histories in the city of Portsmouth.