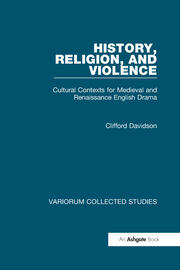 Professor Davidson is concerned here to chart public theatrical display as a barometer of developments in the English Middle Ages and Renaissance. This book brings together twelve previously published articles on historical and religious aspects of the early English theatre as well as an original essay on Marlowe’s Doctor Faustus and the Papacy. Other essays on Renaissance drama focus on Shakespeare against the background of the political and religious crosscurrents of the time. The treatment of medieval drama is dealt with under two headings, the first of which treats sacred violence in the mysteries. The second presents investigations of the cultural contexts for early English drama, from analysis of the claim that the mystery plays were informed by the spirit of Carnival to the signs of Doomsday in the pageant wagons on the streets of Coventry and Chester and in analogous representations in the visual arts.

Contents: Preface; Religious and historical crosscurrents in Renaissance drama: Marlowe, the Papacy, and Doctor Faustus; The History of King Lear and the problem of belief; The anxiety of power and Shakespeare's Macbeth; Antony and Cleopatra: Circe, Venus, and the Whore of Babylon; Sacred violence and the mysteries: Cain in the Mysteries: the iconography of violence; The sacrifice of Isaac in medieval English drama; Nudity, the body, and early English drama; Sacred blood and the late medieval stage; Cultural contexts for early drama: Carnival, Lent, and early English drama; The medieval stage and the antitheatrical prejudice; Idol and image in late medieval art and drama; Saints in play: English theater and saints' lives; Signs of Doomsday in drama and art; Index.

'... presents a very scholarly and relevant view of violence in some of the late-medieval and early Renaissance drama. Davidson's knowledge of the literarure of the period provides an array of textual evidence, and his keen knowledge and use of visual art and iconography broadens the scope of his discussion. History, Religion, and Violence should prove an invaluable reference for students and enthusiasts of early English drama.' Medium Aevum