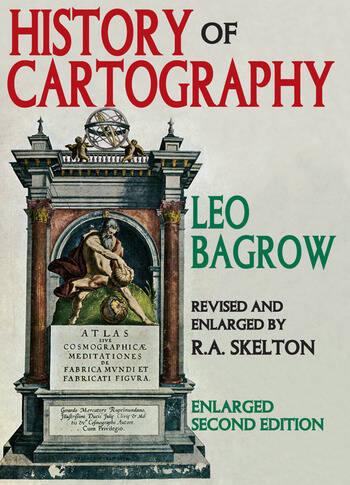 This illustrated work is intended to acquaint readers with the early maps produced in both Europe and the rest of the world, and to tell us something of their development, their makers and printers, their varieties and characteristics. The authors' chief concern is with the appearance of maps: they exclude any examination of their content, or of scientific methods of mapmaking. This book ends in the second half of the eighteenth century, when craftsmanship was superseded by specialized science and the machine. As a history of the evolution of the early map, it is a stunning work of art and science.

This expanded second edition of Bagrow and Skelton's History of Cartography marks the reappearance of this seminal work after a hiatus of nearly a half century. As a reprint project undertaken many years after the book last appeared, finding suitable materials to work from proved to be no easy task. Because of the wealth of monochrome and color plates, the book could only be properly reproduced using the original materials. Ultimately the authors were able to obtain materials from the original printer Scotchprints or contact films made directly from original plates, thus allowing the work to preserve the beauty and clarity of the illustrations.

Old maps, collated with other materials, help us to elucidate the course of human history. It was not until the eighteenth century, however, that maps were gradually stripped of their artistic decoration and transformed into plain, specialist sources of information based upon measurement. Maps are objects of historical, artistic, and cultural significance, and thus collecting them seems to need no justification, simply enjoyment.

Preface
List of Illustrations
Foreword: The early map
1 Maps of primitive peoples
2 Cartography in the ancient world
3 The Christian Middle Ages
4 Islamic cartography
5 Mediaeval sea-charts
6 World maps of the later Middle Ages
7 Ptolemy and the Renaissance
8 The fifi rst printed maps
9 The end of the Middle Ages
10 The cartography of the Great Discoveries
11 Nautical cartography in the 16th century
12 Map workshops and the world map of the 16th century
13 The mapping of European countries Italy 144, Germany 147, Switzerland 154, Austria-Hungary and South-east Europe 156, The Netherlands 159, France 160, Spain and Portugal 161, Great Britain and Ireland 162, Scandinavia 165, Eastern Europe 170,
Russia 170, The Map of Europe
14 The century of atlases
15 The mapping of America
16 The cartography of Asian peoples China 197, Manchuria and Central Asia 203, Korea 204, Japan 204, India 207, South-east Asia 208, Persia and Arabia 208, Turkey
Postscript: Craftsmanship and design in early cartography
Notes to the text
List of cartographers
Bibliography
Index