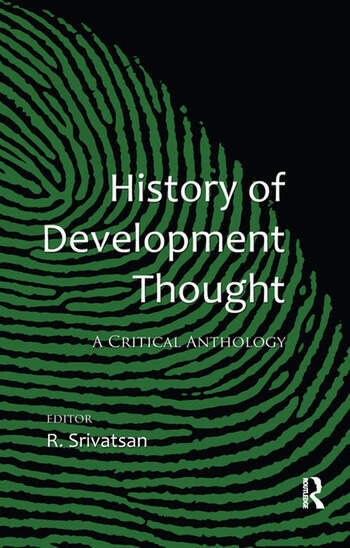 Development thought emerged as the governing principle of First World global hegemony in the new world order marked by the end of the Second World War and decolonization. Six decades later, at yet another critical geopolitical conjuncture marked by globalization and neoliberal resurgence, History of Development Thought revisits the major strands in the development debate from the 1950s to the early twenty-first century. The volume places classic international interventions in critical development thinking alongside major contributions to the discourse from the Indian context.

Beginning by juxtaposing W. A. Lewis’s classic liberal theory of the dual economy with P. C. Mahalanobis’s schema for planned development in India, the volume tracks the trajectory of the development debate — from the Latin American neo-Marxist paradigm, through the ‘mode of production’ debates in India, to Indian and international feminist perspectives on development. It explores the departures of the 1980s in India and elsewhere as theorists, including Pranab Bardhan, Sukhamoy Chakravarty, Partha Chatterjee, A. O. Hirschman, Samuel Huntington, and Amartya Sen, sought to address from various perspectives the reasons for the failure of development to live up to expectations. It ends with excerpts signposting the emerging strands of the development (and post-development) debate at the turn of the twenty-first century.

Throughout, the volume remains committed to the paradigm of development as a horizon of critical thought and a field of democratic politics, while paying attention to the multiple storylines of the discourse over the last 60 years. This anthology, together with its critical introduction and rigorous prefatory remarks for each extract, will be invaluable to students and researchers in the social sciences and the humanities, especially those in development studies, history, politics and economics, as well as to activists, administrators, and professionals in health, education, and development.