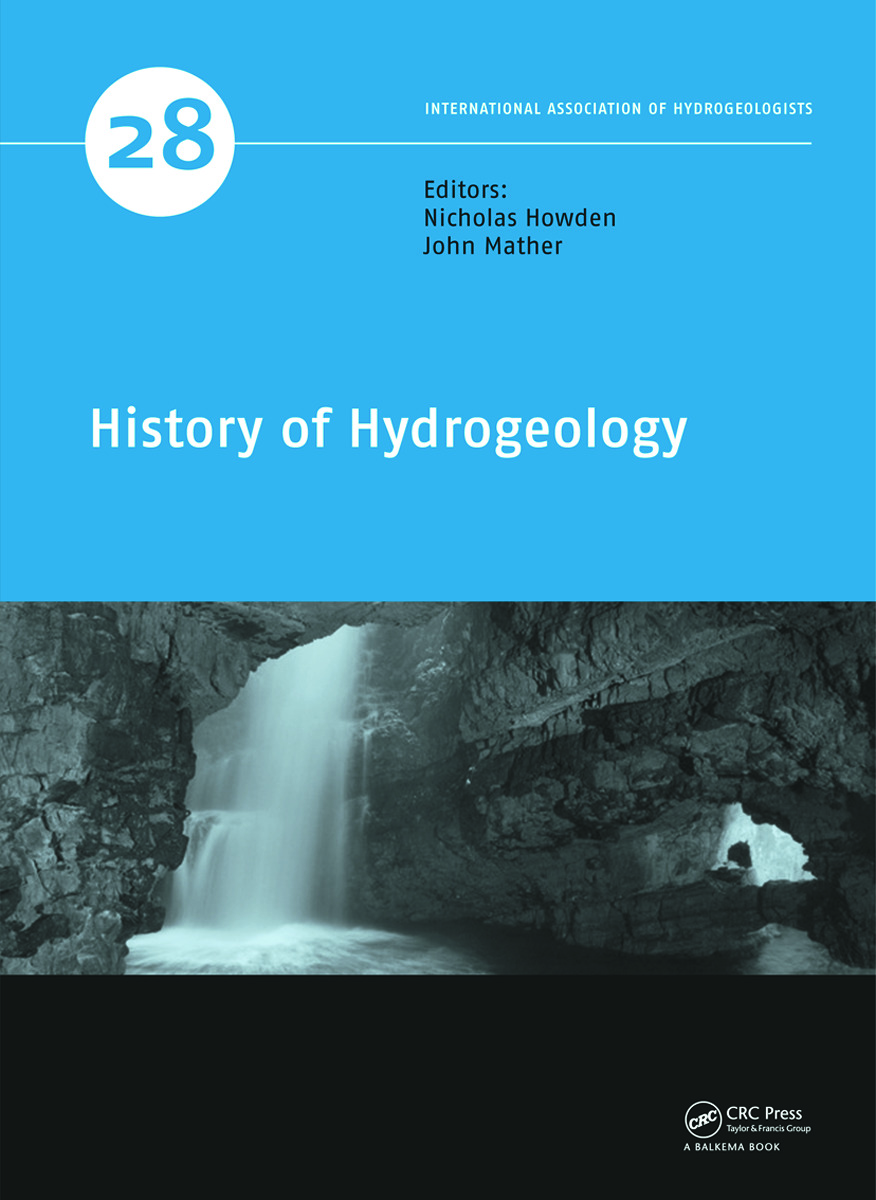 Lessons can be learnt from the past; from time to time it is useful for practitioners to look back over the historical developments of their science. Hydrogeology has developed from humble beginnings into the broad church of investigatory procedures which collectively form the modern-day hydrogeologist’s tool box. Hydrogeology remains a branch of the over-arching science of geology and today provides analysis of the sub-surface part of the water cycle within a holistic approach to problem solving.

The History of Hydrogeology, is a first attempt to bring the story of the evolution of the science of hydrogeology together from a country- or region-specific viewpoint. It does not cover history to the present day, nor does it deal with all countries involved in groundwater studies, but rather takes the story for specific key countries up and until about the period 1975 to 1980. This is when hydrogeology was still evolving and developing, and in some areas doing so quite rapidly.

The book has been written not only for practitioners of hydrogeology and hydrology but also for teachers and students to see the context of the evolution of the science around the globe. The History of Hydrogeology will also be of interest to science historians and all those interested in the role that individuals, institutes and nations have played over the years in defining modern day studies of groundwater.

"…provides the historical prospective of the science back to the beginning of hydrogeology. …Descriptions include numerous nations in Europe, most notably UK, France and Germany…science historians may also enjoy the wide range of stories of the evolution of hydrogeology as it developed in a country or region. For those who are interested in the history of hydrogeology based on specific countries, this book provides the answers and would be useful for those going overseas for a project to one of the countries featured in the book."

"Most striking is how much the development of hydrological studies in each country is influenced by that country's overall culture and politices, as well as geographic and geologic factors unique to each region. (…) This book gives a good sampling of these country-specific journeys. (…) Summing Up: Recommended. Upper-division undergraduates through professionals."

"History of Hydrogeology collects the essays from a variety of learned experts in the scientific field of hydrogeology, with particular emphasis on the history and evolution of the discipline. A handful of black-and-white photographs and diagrams illustrate such insightful writings as "Island hydrogeology: Highlights from early experience in the West Indies and Bermuda", "250 years of Russian hydrogeology (1730-1980)", "The progress of hydrogeology in Britain: 1600 to 2000", as well as essays on the history of hydrogeology in Australia, China, the Czech Republic, France, Central Europe & Germany, Hungary, India, Japan, the Netherlands, Norway, Poland, Romania, Serbia, South Africa, Spain, Sweden, and the U.S. Each essay is complemented with references. History of Hydrogeology is at times technical, clearly intended for experts and professionals in the field; its wealth of information makes it an ideal choice for college and graduate school libraries, as well as geology reference shelves.

The history of hydrogeology project

The history of hydrogeology in Australia

Island hydrogeology: Highlights from early experience in the West Indies and Bermuda

History of hydrogeology in China

Hydrogeology in the Czech Republic

History of hydrogeology in Central Europe, particularly relating to Germany

A brief history of Indian hydrogeology

History of hydrogeology in Japan

The history of hydrogeology in Norway

A brief history of Romanian hydrogeology

The history of hydrogeology in Serbia

The History of Hydrogeology in Spain

Nicholas Howden is Senior Lecturer in Water in Queen’s School of Engineering at the University of Bristol. He studied Engineering at Durham University and hydrology, hydrogeology and geochemistry at Imperial College London, and then became a consultant in the mining, oil and gas industries. In 2007 he joined the UK’s National Soil Resources Institute (NSRI) at Cranfield University as Lecturer in Soil and Water Engineering and moved to Bristol in 2010. At Bristol he is Director of the MSc in Water and Environmental Management and is also Head of the Water and Environment Research Group in the Faculty of Engineering. Nicholas was awarded the Young Hydrogeologists’ Prize by the Geological Society in 2003, and has been a member of IAH since 2004. He is the author of 60 articles in the scientific and technical literature.

John Mather retired from the position of Lyell Professor of Geology in the Department of Earth Sciences at Royal Holloway, University of London in 2001. He currently lives near Exeter in south-west England where he makes functional stoneware pottery and writes on the history of hydrogeology. Educated at Liverpool University he joined the British Geological Survey in 1966, rising to the position of Assistant Director before moving to academia in 1990. He has been a member of IAH since 1973 and was chairman of the British Committee from 1991 to 1995 and co-chair of the 27th Congress held in Nottingham in 1997. He has undertaken research projects in the UK, Romania, China, West Indies, Central America and the Middle East and advised the European Community, OECD, IAEA and UK and US agencies on various aspects of groundwater development and waste management. During a career spanning nearly 50 years he has specialised in the geochemical aspects of hydrogeology and is the author of some 150 articles in the scientific and technical press.

The International Association of Hydrogeologists (IAH) serves scientists, engineers and other professionals working in the field of groundwater resource planning, management and protection. IAH has two book series which are produced under the imprint of CRC Press in the Netherlands, part of the Taylor and Francis Group. IAH books have the common purpose of spreading the science and knowledge of hydrogeology and are products arising from IAH’s congresses and meetings, its commissions and networks, as well as a variety of other sources. Information is gathered from highly respected sources and include case studies, regional descriptions, analyses of sub-disciplines and outputs from major international programmes.

Selected Papers
The first series is the Selected Papers, often referred to as the ‘green books’. These are collections of papers derived from Congress and other meetings which normally, but not always, were sponsored by IAH. They may also be a collection of papers derived from a programme of investigation that again need not necessarily have enjoyed direct IAH involvement.