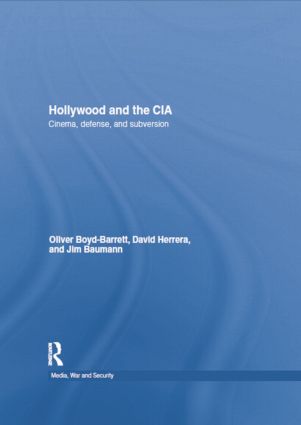 Hollywood and the CIA

This book investigates representations of the Central Intelligence Agency (CIA) in Hollywood films, and the synergies between Hollywood product, U.S. military/defense interests and U.S. foreign policy.

As probably the best known of the many different intelligence agencies of the US, the CIA is an exceptionally well known national and international icon or even "brand," one that exercises a powerful influence on the imagination of people throughout the world as well as on the creative minds of filmmakers. The book examines films sampled from five decades - the 1960s, 1970s, 1980s, 1990s and 2000s - and explores four main issues: the relative prominence of the CIA; the extent to which these films appeared to be overtly political; the degree to which they were favorable or unfavorable to the CIA; and their relative attitude to the "business" of intelligence. A final chapter considers the question: do these Hollywood texts appear to function ideologically to "normalize" the CIA? If so, might this suggest the further hypothesis that many CIA movies assist audiences with reconciling two sometimes fundamental opposites: often gruesome covert CIA activity for questionable goals and at enormous expense, on the one hand, and the values and procedures of democratic society, on the other.

This interdisciplinary book will be of much interest to students of the CIA/Intelligence Studies, media and film studies, US politics and IR/Security Studies in general.

Oliver Boyd-Barrett is Professor of Journalism at Bowling Green State University, and author/editor of 20 books and over 120 scholarly articles.

David Herrera is a graduate student at the Missouri School of Journalism in Columbia, MO. He worked as a Web Producer at the Detroit Free Press after graduating from Bowling Green State University where he studied journalism and popular culture.

This book series interrogates and seeks to illuminate the mutually shaping relationship between war and media as transformative of contemporary society, politics and culture.