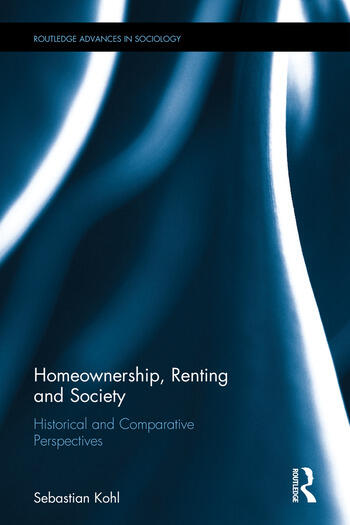 On the eve of the financial crisis, the USA was inhabited by almost 70 percent homeowning households, in comparison to about 45 percent in Germany. Homeownership, Renting and Society presents new evidence showing that this homeownership gap already existed between American and German cities around 1900. Existing explanations based on culture, government housing policy or typical socio-economic factors have difficulties in accounting for these long-term cross-country differences.

Using historical case studies on Germany and the USA, the book identifies three institutional domains on the supply-side of the housing market – urban land, housing finance and construction – that set countries on different housing trajectories and subsequently established differences that were hard to reverse in later periods. Further chapters generalize the argument across other OECD (Organisation for Economic Co-operation and Development) countries and extend the explanation to cover historical differences in homeownership ideology and horizontal property institutions. This enlightening volume also puts forward path-dependence theories in housing studies, connects housing with vast urban-history and political-economy literature and offers comprehensive insights about the case of a tenant’s country which contradicts the tendency towards universal homeownership.

Providing an all-new historic-institutionalist explanation of the German–American homeownership gap, this title will be of interest to postgraduate students and scholars interested in fields including: Housing Studies, Sociology, Urban History, Political Economy, Social Policy and Geography. It may also be of interest to those working in housing field organizations and ministries.

Chapter 1: The historical origins and persistency of suburbanized versus compact cities

1.1 How Germany became a country of multi-unit buildings

1.2 How the US became urbanized in single-family-house cities

4.1 Exploring the generalizability: from two cases to OECD countries

4.2 Differences in the legal tradition of horizontal ownership

4.3 The origins and country-differences of the homeownership idea

Sebastian Kohl is a researcher at the Institute for Housing and Urban Research, Uppsala University, Sweden.