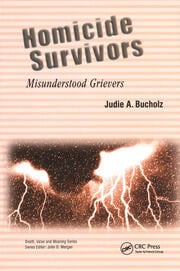 "Homicide Survivors: Misunderstood Grievers" is about families that have faced murder and how they have dealt with the trauma. It offers an interpretation of personal accounts of homicide survivors in order to understand the particular nature of homicide bereavement. The author herself a homicide survivor, Judie Bucholz offers a unique perspective and experiential base for examining the phenomenon of homicide bereavement. Her intent is to help the reader understand the homicide griever's situation both as one who grieves and one who grieves within a social context, as one who confronts horrific death at the personal level as well as at the social level.

Part One
This section contains 10 stories from homicide survivors.

Chapter 1
Jack describes how his granddaughter was murdered. After this traumatic experience, he dedicated his life to helping homicide survivors. The path through the criminal justice system and Parents of Murdered Children (POMC) are presented.

Chapter 3
Sue believes her daughter was killed as a result of their daughter's boyfriend's drug related activities. Sue's health has deteriorated since the murder. The 27 Problems of Homicide Survivors are mentioned.

Chapter 5
Mike's brother's body was found over a year after the murder. Mike and his family never gave up looking for him. Parole and the POMC Parole Block Program are detailed.

Chapter 6
Ron, Jean, and Kim believe that two men live a life of luxury in prison while their son/brother is dead. Issues discussed include policy changes, civil recourse and types of homicide.

Chapter 8
Rita's mother was murdered during a robbery at work. The Vine Program is discussed.

Chapter 9
Rose's mother was brutally murdered during a robbery at home. Visits from the after life, sense of presence, continued relationships, and linking objects are reviewed.

Part Two
This section contains information about the reactions of the grieving loved ones.

Chapter 11
Themes from the survivor's stories are told.

Part Three
This section contains a summary and offers suggestions to comfort the bereaved.

Chapter 13
An explanation of the process of homicide bereavement is given. It is a personal idiosyncratic process, where the personal reality of the loss is different for each individual.