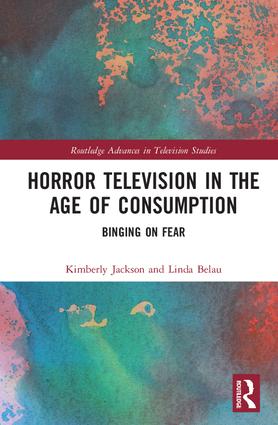 Horror Television in the Age of Consumption

Characterized as it is by its interest in and engagement with the supernatural, psycho-social formations, the gothic, and issues of identity and subjectivity, horror has long functioned as an allegorical device for interrogations into the seamier side of cultural foundations. This collection, therefore, explores both the cultural landscape of this recent phenomenon and the reasons for these television series’ wide appeal, focusing on televisual aesthetics, technological novelties, the role of adaptation and seriality, questions of gender, identity and subjectivity, and the ways in which the shows’ themes comment on the culture that consumes them. Featuring new work by many of the field’s leading scholars, this collection offers innovative readings and rigorous theoretical analyses of some of our most significant contemporary texts in the genre of Horror Television.

1. Pigeons from Hell: Anthology Horror on American Television in the 1950s and 1960s (Peter Hutchings)

3. The Thing "Chants Out Between Two Worlds": Surreal Latency in the Twin Peaks Universe

4."If I could have feelings at all, I’d have them for Deb": Love, Law, and Loss in Showtime’s Dexter(Kimberly Jackson)

6. "The World is Changing Again": Bodies, Interpretation, and the Monotony of the Drive in The Walking Dead (Alexander N. Howe)

8.Masters of Mise-En-Scène: The Stylistic Excess of Hannibal(Stacey Abbott)

9. Sleepy Hollow and the Horrors of History Post 9/11 (Jim Daems)

10. It’s a Monster Mash! Penny Dreadful and the Return to (and of) Contemporary Horror’s Victorian Roots (Michael Fuchs)

11. Slashing through the Bonds of Blood: Queer Family and Scream: The TV Series (Kyle Christensen)

13. "Welcome to the Upside Down:" Nostalgia and Cultural Fears in Stranger Things (Rose Butler)

Linda Belau is Professor in the Department of Literature and Cultural Studies and Director of Film Studies at the University of Texas-Rio Grande Valley, USA. She is the editor of Topologies of Trauma (2002), Psychoanalysis and La Femme (2010) and the author of several articles on literary, cultural, and cinema studies.