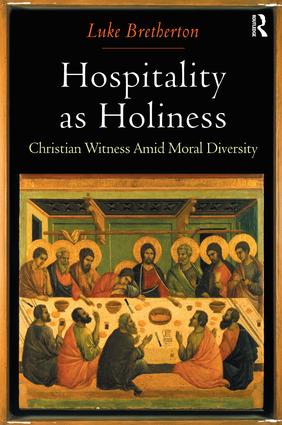 We live amid increasing ethical plurality and fragmentation while at the same time more and more questions of moral gravity confront us. Some of these questions are new, such as those around human cloning and genetics. Other questions that were previously settled have re-emerged, such as those around the place of religion in politics. Responses to such questions are diverse, numerous and often vehemently contested. Hospitality as Holiness seeks to address the underlying question facing the church within contemporary moral debates: how should Christians relate to their neighbours when ethical disputes arise? The problems the book examines centre on what the nature and basis of Christian moral thought and action is, and in the contemporary context, whether moral disputes may be resolved with those who do not share the same framework as Christians. Bretherton establishes a model - that of hospitality - for how Christians and non-Christians can relate to each other amid moral diversity. This book will appeal to those interested in the broad question of the relationship between reason, tradition, natural law and revelation in theology, and more specifically to those engaged with questions about plurality, tolerance and ethical conflict in Christian ethics and medical ethics.

'The issues in this book will be recognised as crucial by anyone who wants to achieve a more satisfying grasp of the relation to each other of Christian ethics and moral philosophy, and by anyone who wants to understand what makes for fruitful exchanges between interlocutors who really do hold opposing views. Bretherton's clear and engaging text reaches beyond mere analysis and criticism to the development of a model of dialogue in terms of 'hospitality'.' commend this book strongly and without reserve.' Nigel Biggar, Oxford University, UK 'Bretherton’s book is quite brilliant: elegant in its structural composition, tightly argued, lucidly written, erudite, nuanced and urbane, and relentlessly theological.' Gavin D’Costa, University of Bristol, in Theology (2008) ’Bretherton’s argument and example of euthanasia/hospice as an expression of the church’s hospitality is quite compelling. His attempt to demonstrate that the church can engage a very pluralistic moral and cultural environment constructively while retaining its own criteria of moral evaluation is persuasive. … The book is well-written and is an important contribution to contemporary reflections about how the church should engage its cultural context.’ Christine Pohl, Asbury Theological Seminary, in Studies in Christian Ethics (2007) 'Hospitality as Holiness is a book of one big idea, a good one, which is explored from every possible angle and put in every possible light. … I hope, now, that it will be suggestive, and that Bretherton himself, and others following his lead, will take the big idea further, exploring the full scope of the work it is capable of doing for us.’ Oliver O’Donovan, University of Edinburgh, UK in Political Theology (2008) 'It is a book for our times as it seeks to address the issue of relations between Christian and non-Christian in a world which is aggressively multi-cultural and riven with an incommensurable variety of ethics.' Fulcrum '… Bretherton ma

Contents: Preface; Introduction. Part I The Problem of Moral Plurality: Alasdair MacIntyre's diagnosis of the contemporary context; Germain Grisez and the shared rationality of all moral traditions; Oliver O'Donovan and the distinctiveness of Christian ethics. Part II The Nature and Shape of Christian Hospitality: Local politics, ecclesiology and resisting modernity; The practice of hospitality; Hospitality, hospice care and euthanasia - a case study in negotiating moral diversity. Conclusion; Bibliography; Index.

Luke Bretherton is Senior Lecturer in Theology & Politics, and Convenor of the Faith & Public Policy Forum at King’s College London. He has worked with a variety of faith-based NGOs, mission agencies and churches in several national and international contexts. He is the author of Christianity and Contemporary Politics: The Conditions and Possibilities of Faithful Witness (2010) and Reviews Editor of the journal Political Theology.