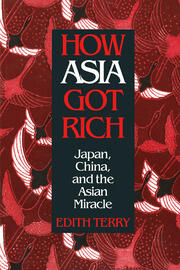 Within a few short months in 1997, Asian economies that had been considered not only healthy but "miraculous" suddenly fell off a precipice as investors withdrew massively first from Asian currencies and, in rapid order, from equity markets across the region. On October 27 1997, the turmoil in Asian markets spooked Wall Street in the largest single-day decline in history, a drop of 550 points. It was predicted that the Asian crash could drive the US trade deficit from $191 billion to $300 billion by 1998, creating huge new tensions in relations with some of the largest US trading partners. These wrenching changes, following a generation of success, raise numerous questions about the steps that led to the crisis, its likely outcome and the limits and constraints of "Asian capitalism". Edith Terry presents a blow-by-blow account of the crisis, beginning with the 1996 collapse of the Bangkok Bank of Commerce. In her overview, she links the fall of the Asian miracle with the theme of globalization, arguing that the crisis demonstrates the urgency of dismantling restraints to trade, investment, and financial services, and that the United States should take leadership in pushing for new and sweeping reform through the World Trade Organization and in bilateral negotiations with its trading partners. The final section of the book deals with the rise of the "Asian miracle" - how the myth was created, who created it, why it succeeded for so long - and is informed by analysis of the Japanese prototype.

This fascinating book tells the story of modern Hungarian society through the interconnected lives of several families in a small town on the Great Hungarian Plain. It opens in 1989 - on the eve of communism's collapse - with the suicide of the town's dynamic and popular mayor. The author quickly sketches in the details of the small scandal that precipitated the mayor's shocking act. Amazingly enough, this small scandal in a small town became a sensation in the Hungarian national press during the months leading up to the fall of the regime. It was seen to typify the corruption of national life under the communist system. Following this prologue, each of the three parts of the book tells the story of one of the families over the course of the last century - and, through that family history, the story of one of the social groups making up the community. The ups and downs of each family are tied not only to the strengths and weaknesses of its individual members, but also to the twists and turns of East European history and the vagaries of politics under changing political regimes and economic systems. At the end of the book, the author revisits the town (in 1998) and the surviving characters, and tells of their fate in the new Hungary.