How Britain Got the Blues: The Transmission and Reception of American Blues Style in the United Kingdom 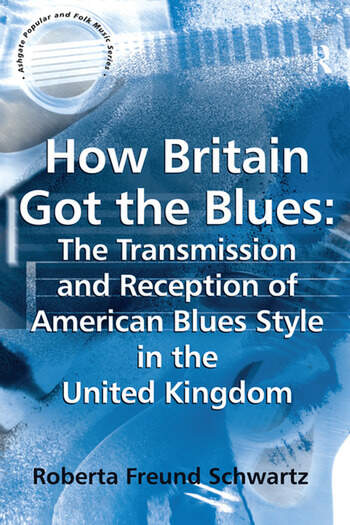 How Britain Got the Blues: The Transmission and Reception of American Blues Style in the United Kingdom

This book explores how, and why, the blues became a central component of English popular music in the 1960s. It is commonly known that many 'British invasion' rock bands were heavily influenced by Chicago and Delta blues styles. But how, exactly, did Britain get the blues? Blues records by African American artists were released in the United States in substantial numbers between 1920 and the late 1930s, but were sold primarily to black consumers in large urban centres and the rural south. How, then, in an era before globalization, when multinational record releases were rare, did English teenagers in the early 1960s encounter the music of Robert Johnson, Blind Boy Fuller, Memphis Minnie, and Barbecue Bob? Roberta Schwartz analyses the transmission of blues records to England, from the first recordings to hit English shores to the end of the sixties. How did the blues, largely banned from the BBC until the mid 1960s, become popular enough to create a demand for re-released material by American artists? When did the British blues subculture begin, and how did it develop? Most significantly, how did the music become a part of the popular consciousness, and how did it change music and expectations? The way that the blues, and various blues styles, were received by critics is a central concern of the book, as their writings greatly affected which artists and recordings were distributed and reified, particularly in the early years of the revival. 'Hot' cultural issues such as authenticity, assimilation, appropriation, and cultural transgression were also part of the revival; these topics and more were interrogated in music periodicals by critics and fans alike, even as English musicians began incorporating elements of the blues into their common musical language. The vinyl record itself, under-represented in previous studies, plays a major part in the story of the blues in Britain. Not only did recordings shape perceptions and listening habits, but which artists were available at any given time also had an enormous impact on the British blues. Schwartz maps the influences on British blues and blues-rock performers and thereby illuminates the stylistic evolution of many genres of British popular music.

Roberta Freund Schwartz is Associate Professor of Historical Musicology, and advising director of the University’s Archive of Recorded Sound, University of Kansas, USA. She specializes in Spanish music, the music of the Renaissance, patronage, and African American influenced popular music.

Prize: Winner of the 2008 ARSC (Association for Recorded Sound Collections) Award for Excellence 'Best History' 'Roberta Schwartz’ clearly constructed history lays bare the actions, and some of the motives, behind the single most influential conglomeration of British musicians in the post-war period. Scrupulous attention to sources produces a very solid study exploring musicians and their gigs, fans, outlets for the music, and blues scholarship itself. Students of post-war British popular culture should have this book on their shelves.' Allan F. Moore, University of Surrey, UK ’... a very readable, scholarly, yet entertaining study of a fascinating period in the development of British popular music... This review can only hint at the richness of information which Professor Schwartz has assembled - Blues fans will be not be disappointed.’ VJM's Jazz & Blues Mart ’How Britain got the Blues is elegantly written and free from academic jargon.’ The Jazz Rag