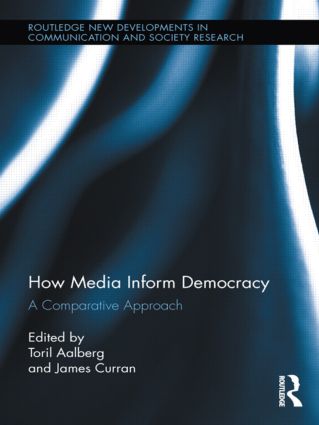 In this timely book, leading researchers consider how media inform democracy in six countries – the United States, the United Kingdom, Belgium, the Netherlands, Norway, and Sweden. Taking as their starting point the idea that citizens need to be briefed adequately with a full and intelligent coverage of public affairs so that they can make responsible, informed choices rather than act out of ignorance and misinformation, contributors use a comparative approach to examine the way in which the shifting media landscape is affecting and informing the democratic process across the globe. In particular, they ask:

This study combines a content analysis of press and television news with representative surveys in six nations. It makes an indispensable contribution to debates about media and democracy, and about changes in media systems. It is especially useful for media theory, comparative media, and political communication courses.

'The book is rich with interesting findings…a vital addition to both scholars and society.' – MichaelKarlsson, Global Media Journal

Toril Aalberg is Associate Professor of Media Sociology at the Norwegian University of Science and Technology in Trondheim, Norway.

James Curran is Director of the Goldsmiths Leverhulme Media Research Centre and Professor of Communications at Goldsmiths, University of London, UK. He is the author or editor of 20 books about the media, some in conjunction with others. These include Media and Democracy (Routledge, 2011), Media and Society, 5th edition (2010, Bloomsbury), Power Without Responsibility, 7th edition (with Jean Seaton, 2010, Routledge) and Media and Power (2002, Routledge), translated into five languages.

This series is devoted to innovative research in media and cultural studies. It will prioritize new directions of research, with an orientation towards work that is critical of contemporary media and society and that seeks to integrate theory and empirical research.