How Video Works
From Broadcast to the Cloud 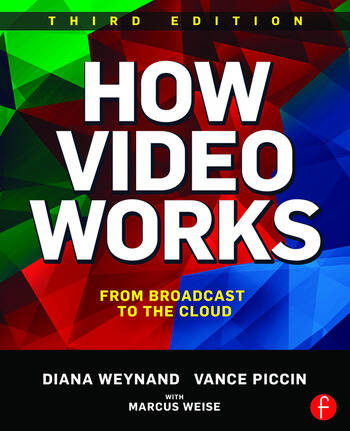 How Video Works: From Broadcast to the Cloud

How Video Works raises the curtain on how video is created, scanned, transmitted, stored, compressed, encoded, delivered and streamed to its multitude of destinations. In today’s digital world, every content creator—individual as well as network or corporation—must understand the process of how video works in order to deliver not only the best quality video, but a digital video file with the most appropriate specifications for each particular use. This complete guide covers key stages of video development, from image capture to the final stages of delivery and archiving, as well as workflows and new technologies, including Ultra High Definition, metadata, signal monitoring, streaming and managing video files – all presented in an easy to understand way. Whether you are a professional or new video technician discovering the ins and outs of digital distribution, this book has the information you need to succeed. The updated third edition contains:

• Thorough explanations of managing video files, including codecs and wrappers

• A complete explanation of video and audio standards, including Ultra HD

• An overview of video recording and storage formats

• A complete glossary of terms for video, audio and broadcast

Diana Weynand is an award-winning Producer, Director, Editor, and the co-founder of Rev Up Tech, a leader in training and consulting for emerging technologies. Diana was Supervising Editor for the Barbara Walters Specials, Director and Producer of the Emmy-nominated PBS series Cinematic Eye, and the PBS documentary Endangered Species: The San Francisco Cable Cars, and Online Editor for the Olympics and Real World. She authored Apple's certified Final Cut Pro books, and has written extensiveley on video.

Vance Piccin is a freelance Video Editor specializing in Sports, Corporate, Talk Shows, and News Magazines. As Editor and Edit Supervisor, he has covered the NBC Olympics for over ten years, and has garnered seven Emmys in Outstanding Achievement in areas including Graphic Designer, Outstanding Team Studio, and Outstanding Technical Team Remote.

Marcus Weise has operated in both production and post production in the television industry. He has been an Associate Director, Online Editor, and Technical Consultant. His many credits include being an Online Editor for CSI.