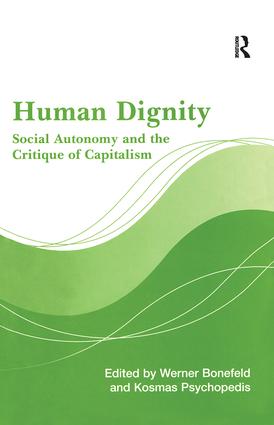 Social Autonomy and the Critique of Capitalism, 1st Edition

Against the background of growing uncertainty about the future development of capitalism, and in the face of war, terror and poverty, this book asks: What do we have to know to prevent misery? What can we do to achieve conditions of human dignity? And what must we hope for? The volume argues that all social life is essentially practical and explores the central most important value of human dignity. It discusses practical consequences in relation to the theory of revolution and contemporary anti-globalization struggles. Targeted towards advanced undergraduate courses and taught post-graduate courses in the field of politics, sociology, political philosophy and new social movement studies, it should also be welcomed in the study of critical theory, Marxism, labour studies and revolutionary thought.

'I cannot think of any work in/on Marxist theory published in recent years where the contributions are as provocative and as well argued - or as convincing - as in this superb scholarly selection. There is no reason for surprise, however, given that they were written by some of the world's leading Marxist thinkers. And all this on the most important topics of our time. An outstanding work destined to become the focus of a much needed debate among Marxists and non-Marxists alike. Five stars.’ Professor Bertell Ollman, New York University, USA 'Many continue to hold that Marxism is an exhausted research program without practical relevance. It is probably too much to hope that this brilliant collection will put to rest that idea. But it should. The authors are among the world's foremost authorities on both Capital and struggles against the present form of globalization. No one interested in either Marxian theory or contemporary social movements should overlook this set of carefully-argued and provocative essays.' Professor Tony Smith, Iowa State University, Iowa, USA 'This collection of essays addresses the turmoil of our times - war, terrorism, and poverty - with reference to the large-scale historical developments usually referred to as "globalization". The essays raise fundamental questions regarding the compatibility of capitalism and human dignity, and distinguish anti-globalization movements that enhance such dignity from those that, in the name of resistance, further undermine it. Anyone interested in coming to grips critically with the present as history will be stimulated by reading this book.' Moishe Postone, University of Chicago, USA 'The volume argues that all social life is essentially practical and explores the central most important value of human dignity. It discusses practical consequences in relation to the theory of revolution and contemporary anti-globalization struggles. By the authors of the excellent "Open Marxism" series.'

Contents: Human dignity: social autonomy and the critique of capitalism, Werner Bonefeld and Kosmas Psychopedis. Critique of Capitalism and the Question of Revolution: Some aspects of Marx's concept of critique in the context of his economic-philosophical theory, Hans-Georg Backhaus; Social reality as appearance: some notes to Marx's conception of reality, Helmut Reichelt; Social critique and the logic of revolution: from Kant to Marx and from Marx to us, Kosmas Psychopedis. Social Autonomy: Time, Experiences and Means: Beyond the muck of ages, Michael A. Lebowitz; The untimely timeliness of Rosa Luxemburg, Joseph Fracchia; Time of reification and time of insubordination. Some notes, Sergio Tischler. Human Dignity; Anti-Capitalism and Perverted Forms of Resistance: Nationalism and anti-Semitism in anti-globalization perspective, Werner Bonefeld; Stop making Capitalism, John Holloway; Index.