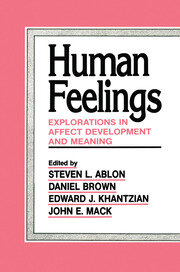 Human Feelings provides a comprehensive overview of the role of emotions in human life.  Growing out of the research and writing of members of the Harvard Affect Study Group, the volume brings to bear different disciplinary outlooks and different modes of inquiry on various aspects of human affective experience.  The book opens with an section of "Theoretical Considerations" that includes an overview of affective development across the life cycle, an examination of affect and character, and an empirical analysis of gender differences in the expression of emotion.  A series of clinical reports involving patients in different age groups comprises the next section, "Affect and the Life Cycle."  Subsequent sections on "Trauma, Addiction, and Psychosomatics" and "Transformations of Affect" traverse the realms of neurobiology, addictive suffering, stress disorders, epistemology, creativity, and social organization.  A final section, "New Directions," further extends the frontiers of inquiry into nonordinary states of consciousness and the vicissitudes of well-being.

An integrative collection of multidisciplinary sweep and scholarly integrity, Human Feelings is a readable source book that brings together rigorous theoretical and developmental studies, experientially vivid self-reporting, and a wealth of illustrative clinical material.  An invaluable addition to the libraries of mental health professionals and developmental researchers, this volume will be illuminating for philosophers, social and political scientists, and lay readers as well.

Ablon, Introduction. Part I: Theoretical Considerations. Brown, Affective Development, Psychopathology, and Adaptation. Palmer, Affect and Character. Brody, On Understanding Gender Differences in the Expression of Emotion. Part II: Affect and the Life Cycle. Ablon, The Therapeutic Action of Play and Affect in Child Analysis. Harrison, Affective Interactions in Families with Young Children. Smith, Problems with Affect Tolerance in the Analysis of an Adolescent Girl. Margulies, Empathy, Virtuality, and the Birth of Complex Emotional States: Do We Find or Do We Create Feelings in the Other? Morgan, Affect in the Elderly: Do Older People Feel Differently? Part III: Trauma, Addiction, and Psychosomatics. van der Kolk, Biological Considerations about Emotions, Trauma, Memory, and the Brain. Haley, I Feel a Little Sad: The Applications of Object Relations Theory to the Hypnotherapy of Posttraumatic Stress Disorders in Vietnam Veterans. Khantzian, Affects and Addictive Suffering: A Clinical Perspective. Brown, Stress and Emotion: Implications for Illness Development and Wellness. Part IV: Transformations of Affect. Jacobs, Theory and Its Relation to Early Affective Experience. Sashin, Duke Ellington: The Creative Process and the Ability to Experience and Tolerate Affect. Mack, The Passions of Nationalism and Beyond: Identity and Power in International Relations. Part V: New Directions. Mack, Nonordinary States of Consciousness and the Accessing of Feelings. Brown, The Path of Meditation: Affective Development and Psychological Well-Being.

Daniel Brown, Ph.D., is Director of Daniel Brown Associates in Cambridge, MA.  He is also Assistant Professor of Psychology, Harvard Medical School at The Cambridge Hospital.

"Human Feelings is essential reading for all mental health works who wish to free themselves from those archaic, 19th-century conceptions that still haunt psychoanalysis.  Here, gender differences in the exprience and expression of emotion are finally discussed.  We are introduced to a variety of approaches and emphases: emotions from the physiological point of view, emotions in relation to modified states of consciousness, emotions as they develop beyond adolescence and into old age.  We see emotions in the context of meditation, music, and poorly understood states of the self.  In short, this is a book that is bound to expand rather than limit the reader's mind."

"I wish that Human Feelings had been published before I completed my PBS series, Healing and the Mind, as it is a feast of plenty for a hungry seeker. A wealth of insights spreads through these pages, the gift of an audacious and original exploration by pioneering researchers into the core of human experience.  We can be grateful these men and women did not stand apart from their subject, satisfied with merely observing and dissecting the feelings of others.  Instead, during five years of collaboration they allowed their own emotions - over the death of colleagues, personal hurts and wounds, their private and communal joys, the life cycle as each encountered it - to instruct their rigorous scholarly thought with the transforming realities of personal experience.  There is much here to stimulate the mind, including some fresh perspectives on gender differences in feeling, but there is also much here to affect the heart."

"With exquisite dedication to Human Feelings, Steven Ablon and his collaborators explore the terrain of affect from Charlotte's Web through transcendental states.  The focus is always on the inner experience of the human, 'feeling,' and is thus quitessentially relevant both clinically and figuratively."

"This interdisciplinary dialogue of members of the Harvard Affect Study Group is eclectic but remarkably integrated, comprehensive, and engaging.  Affect, like art, is conducive to genuine contact and engagement - the glue of interrelation, mutuality, and community.  In the light of a current world situation threatened with such destructive forces as pseudospeciation, every thrust toward interdependence and integration must be vigorously promoted.  This study presents such a timely contribution."