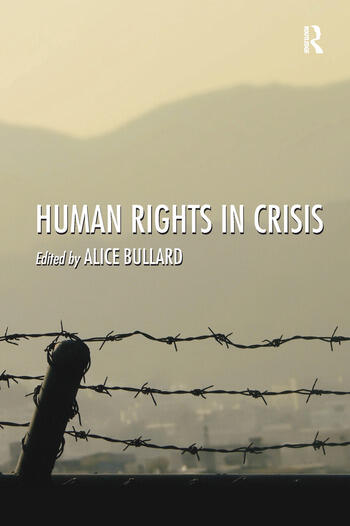 This volume expands our understanding of the pursuit of human rights during the era of the War on Terror. The threat to human rights both in the United States and among detainees in US-governed detention facilities created a widely perceived crisis in human rights. This text explores the broad and complicated ramifications of crisis by looking comparatively at societies in the present era and looking back at the historical and legal foundations of human rights. Human Rights in Crisis contains an element of hope derived from a conviction that the pursuit of human rights happens on many fronts and in many ways around the globe; that a retreat from human rights in the United States does not necessarily signal a global retreat. The essays here include perspectives from History, Anthropology, and Legal Studies, with a resulting interdisciplinary portrait of the complexities of pursuing human rights in wartime.

Alice Bullard is Associate Professor of History, Technology and Society and a member of the Human Rights Initiative of Georgia Institute of Technology, USA.

'Alice Bullard's superbly edited collection opens a wide array of new vistas bearing on the theory and practice of human rights, with a special focus on issues surfacing since 9/11. A valuable contribution of the volume is to lay down the foundations for a sociological approach to human rights. Richard Falk, Princeton University and UCSB, USA 'Covering topics as diverse as women's rights and body counts, torture and trafficking, this is a truly interdisciplinary effort. The book draws on fields such as law and anthropology, geography and medicine, and provides a valuable addition to the shelf of any serious and eclectic reader in the field of human rights.' Richard J. Wilson,American University, USA