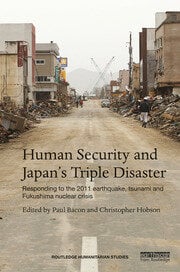 Japan has been one of the most important international sponsors of human security, yet the concept has hitherto not been considered relevant to the Japanese domestic context. This book applies the human security approach to the specific case of the earthquake, tsunami and nuclear accident that struck Japan on 11 March 2011, which has come to be known as Japan's ‘triple disaster’. This left more than 15,000 people dead and was the most expensive natural disaster in recorded history.

The book identifies the many different forms of human insecurity that were produced or exacerbated within Japan by the triple disaster. Each chapter adds to the contemporary literature by identifying the vulnerability of Japanese social groups and communities, and examining how they collectively seek to prevent, respond to and recover from disaster. Emphasis is given to analysis of the more encouraging signs of human empowerment that have occurred. Contributors draw on a wide range of perspectives, from disciplines such as: disaster studies, environmental studies, gender studies, international relations, Japanese studies, philosophy and sociology.

In considering this Japanese case study in detail, the book demonstrates to researchers, postgraduate students, policy makers and practitioners how the concept of human security can be practically applied at a policy level to the domestic affairs of developed countries, countering the tendency to regard human security as exclusively for developing states.

'Many practitioners, scholars and students, both within and beyond Japan, mistakenly imagine human security to be something that applies to ‘others’ in economically underdeveloped countries. Bacon and Hobson are therefore to be congratulated for refining and extending the human security approach, and demonstrating persuasively how it can be applied to the affairs of economically developed democracies in general, and more specifically to the 2011 ‘triple disaster’, with which we are all still trying to come to terms here in Japan.' – Takashi Inoguchi, University of Tokyo, Japan

'The concept of human security has rarely been used or practiced within Japan, as if there were no vulnerable people in the country. Bacon and Hobson remind us that human security is relevant for all countries, and show how it can fruitfully be applied to the variety of challenges that Japan continues to face in the wake of the 2011 ‘triple disaster’'.– Yasushi Katsuma, Waseda University, Japan

'This well-researched and cogently argued volume exposes the facade of the Japanese state's commitment to Human Security in the light of the triple disasters of 3.11. It will be essential reading for anyone seeking to understand human insecurity in post-tsunami Japan.' –Giorgio Shani, the International Christian University, Japan

'This book provocatively shows how the concept of human security applies to one of the most important recent disasters—the earthquake tsunami and nuclear disaster in Japan. It causes us—as students, academics or officials— to reflect humbly on how we can better protect human security, close to home, and further afield.' – Mihir Bhatt, Director, All India Disaster Mitigation Institute, India