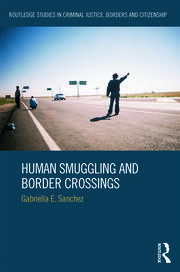 Graphic narratives of tragedies involving the journeys of irregular migrants trying to reach destinations in the global north are common in the media and are blamed almost invariably on human smuggling facilitators, described as rapacious members of highly structured underground transnational criminal organizations, who take advantage of migrants and prey upon their vulnerability.

This book contributes to the current scholarship on migration by providing a window into the lives and experiences of those behind the facilitation of irregular border crossing journeys. Based on fieldwork conducted among coyotes in Arizona - the main point of entry for irregular migrants in the United States by the turn of the 21st Century - this project goes beyond traditional narratives of victimization and financial exploitation and asks: who are the men and women behind the journeys of irregular migrants worldwide? How and why do they enter the human smuggling market? How are they organized? How do they understand their roles in transnational migration? How do they explain the violence and victimization so many migrants face while in transit?

This book is suitable for students and academics involved in the study of migration, border enforcement and migrant and refugee criminalization.

Introduction: Among Coyotes  1. On Borders, Smugglers and the Imagination  2. Coyotes in the era of enforcement: Arizona’s human smuggling market and the criminalization of migration  3. "Together as a family": the nature and structure of smuggling  4. "I am not a pollero": facilitators’ reflections on smuggling  5. Gendering smuggling: women and the facilitation of extralegal border crossings  6. Conceptualizing violence in smuggling  Conclusions.

Gabriella E. Sanchez is an anthropologist by training and a graduate of Arizona State University’s Justice and Social Inquiry Program. Her research interests include borders, migration and transnational crime and labor. She has conducted fieldwork along the US–Mexico border, Mexico, Central America, North Africa, the Middle East and Australia, documenting the experiences of the men and women involved in drug and human smuggling operations as traffickers/smugglers. A Boren and a Fulbright fellow, Gabriella was also a post-doctoral researcher at the University of Maryland’s Consortium for the Study of Terrorism and Responses to Terrorism (START) and a visiting lecturer on Feminism and Transnational Migration at Wellesley College. Gabriella is currently Assistant Professor at The Catholic University of America in Washington, DC and a Research Fellow at Monash University in Melbourne, Australia.

‘In her well-researched book, Sanchez (Catholic Univ. of America) provides an in-depth account of the lives of human smugglers – those who facilitate the entry of irregular migrants into the US. Based on analysis of dozens of cases of smugglers in Arizona, open-ended interviews with smugglers and their clients, and participant observation, the author challenges sensationalized accounts, analyzes the political and economic context in which smugglers work, and focuses on smuggling as labor, a source of income. ... The author explores the historical context of racism and regulation of border crossing in Arizona, women’s roles in smuggling, and the relationship between smugglers and their customers. She provides a valuable critique of the recently passed anti-smuggling law and contextualizes the violence in the migrant journey within the broader context of border enforcement and criminalization. Summing Up: Highly recommended. Upper-division undergraduates and above.’ - C.M. Kovic, University of Houston-Clear Lake, in CHOICE, September 2015

‘This deeply grounded, ethnographic account of the everyday realities of illicit border crossings is exactly the sort of book we need more of in order to understand the dynamics of human smuggling and to demystify sensationalized accounts perpetuated by politicians and the media. Anyone interested in how human smuggling actually works, especially along the Arizona-Mexico border, should read this book.’ - Peter Andreas, John Hay Professor of Political Science and International Studies, Brown University, USA

‘There has been much media coverage of irregular border crossings between the U.S. and its southern neighbor, but few have engaged in a careful and systematic examination of the topic like the one presented here by Dr. Gabriela Sanchez. Through extensive court record reviews, in-depth interviews with both human smugglers and undocumented migrants, and extended field observations, Dr. Sanchez unpacks the complex and often mutually-enabling dynamics between those who wish to cross illegally into the U.S. and those who are ready to facilitate for a fee. Dr. Sanchez’s nuanced analysis of the political tensions in immigration control, informal economy along border communities, and gendered work in the smuggling enterprise has set a new standard for others to follow and emulate.’ - Sheldon Zhang, Professor, Department of Sociology, San Diego State University, USA

‘Human Smuggling and Border Crossings is a landmark book on an epochal issue for Arizona, the United States, and the 21st Century world. At the same time deeply personal and coolly objective, the book provides a unique insight into the lived experiences of smuggling, for migrants, smugglers, and the authorities, and in so doing explodes many of the myths that have distorted our understanding and policy responses to human smuggling.’ - Khalid Koser MBE, Associate Fellow, Geneva Centre for Security Policy

‘The motives of migrants are well known to scholars and students, but studies about the lives of those they trust to guide them are often confused by theory, rhetoric and fear. With a clear, even literary hand, Dr. Sanchez guides us through the struggles and structures of non-violent smugglers, narrating their realities and explaining their experiences. I have yet to read a more thorough, insightful or empathetic account of the oft-maligned, yet little understood people who cross both real and imaginary borders to move others from anarchy to safety.’ - David J. Danelo, Director of Field Research, Foreign Policy Research Institute, USA

'While there have been several accounts of border crossings, some empirical, this book is unique in the field of migration and border crossing studies in that it provides an empirical examination of smuggling facilitators. In Human Smuggling and Border Crossings, Sanchez aims to provide a view into the daily lives of those who work in the human smuggling market and show that they live ordinary lives on the fringes of legality and are not the monsters that the media would have the reader believe... this study is a critical starting point for those who want a better understanding of US-Mexico human smugglers. It is likely to appeal to academics interested in Latin American or Chicano Studies and sociologists and criminologists interested in human smuggling and migration. It is perhaps most relevant to policy makers who should understand the latent consequences of their decisions.' - Kimberly Mathis Pitts, Campbellsville University, Criminal Law and Criminal Justice Law Books (Rutgers University)