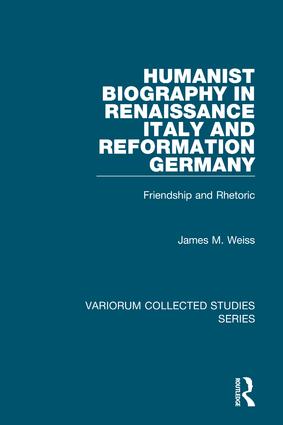 As new kinds of persons arose during the Renaissance and Reformation, writers of biography created new ways to depict them. Foremost among biographers were lay humanists who strategically blended personal memoirs and recently recaptured classical models to produce flexible new forms of biography. After an important new introduction, surveying the practice of biographical writing in Renasaince Italy and Reformation Germany, this collection begins with an analysis of Italian biographies, 1450 to 1550, from Valla through Machiavelli to Vasari. It proceeds to focus on one group in one nation: the German humanists' biographical collections and individual biographies of their humanist colleagues: pedagogues, scholars, poets and some reformers from 1480 to 1620. In addition to familiar subjects or writers like Erasmus, Melanchthon, and Luther, these essays demonstrate humanists' self-awareness of their own cultural importance across the sixteenth century and the enduring continuity of a German humanist culture that transcended religious differences. Some essays explore biographical techniques devised to depict the eccentric individuality of celebrity humanists like Beatus Rhenanus, Petrus Lotichius and Eobanus Hessus. Two essays also explore varied directions taken by pre-Reformation humanists as they re-fashioned the lives of saints, and by the earliest Lutheran reformers' new strategies along similar lines. The volume closes with a study of Erasmus's Ecclesiastes, a treatise on rhetoric, in a sense an 'ideal biography', along with a handlist of biographies discussed. This book will serve scholars of the Italian Renaissance, German humanism and the Lutheran reformation.

'… an essential primer for students of early modern humanist biography, as well as a detailed study of the German humanist identity. … While there is no question that over the past three decades Weiss's work has expanded our perpective of early modern Germany, this 'collected works' format creates a further impact and allows a broader perspective on a detailed and important subject.' Sixteenth Century Journal

Contents: Friendship and rhetoric: an introduction to biography in Renaissance Italy and Reformation Germany; Varieties of biography during the Italian Renaissance: individuality and beyond; Hagiography by German humanists, 1483-1516; Luther and his colleagues on the lives of the saints; Johannes Fichardus and the uses of humanistic biography; The six lives of Rudolph Agricola: forms and functions of humanist biography; Erasmus at Luther's funeral: Melanchthon's commemorations of Luther in 1546; Melanchthon and the legacy of Erasmus: Oratio de Puritate Doctrinae (1536) and the Oratio de Erasmio Roterodamo (1557); The technique of faint praise: Johann Sturm's Life of Beatus Rhenanus; The rhetoric of friendship: Joannes Hagius's Life of Petrus Lotchius Secundus; The harvest of German humanism: Melchior Adams's collective biographies as cultural history; Kennst Du das Land wo die Humanisten blÃ¼hen? References to Italy in the biographies of German humanists; Ecclesiastes and Erasmus: the mirror and the image; Hand lists of biographies cited; Index.