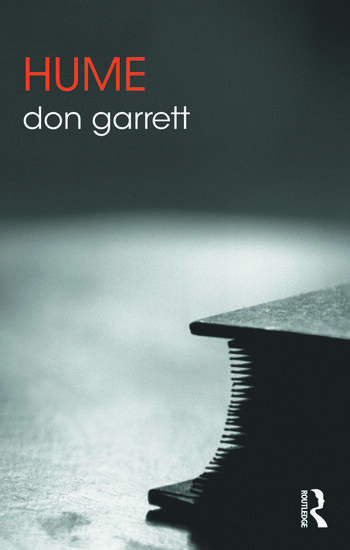 Beginning with an overview of Hume's life and work, Don Garrett introduces in clear and accessible style the central aspects of Hume's thought. These include Hume's lifelong exploration of the human mind; his theories of inductive inference and causation; skepticism and personal identity; moral and political philosophy; aesthetics; and philosophy of religion.

The final chapter considers the influence and legacy of Hume's thought today. Throughout, Garrett draws on and explains many of Hume's central works, including his Treatise of Human Nature, Enquiries Concerning Human Understanding, and Dialogues Concerning Natural Religion.

is essential reading not only for students of philosophy, but anyone in the humanities and social sciences and beyond seeking an introduction to Hume's thought.

Introduction  1. "A Ruling Passion"  2. Perceptions and Principles of the Mind  3. The Mind and its Faculties4. Sense-Based Concepts  5. Normative Concepts  6. Induction and Causation  7. Skepticism and Probability  8. Morality and Virtue9. Religion and God  10. "Leaving it to Posterity to Add the Rest".  Index

Don Garrett is Silver Professor of Philosophy at New York University, USA. He is the author of Cognition and Commitment in Hume's Philosophy (1997) and the editor of The Cambridge Companion to Spinoza (1996). He has served as co-editor of Hume Studies and as North American editor of Archiv fur Geschichte der Philosophie.

"This is an excellent book. Garrett provides a comprehensive yet concise introduction to Hume's thought that should be accessible to newcomers to Hume, including upper-level undergraduates. … The interpretations he offers are nuanced and based on very careful readings of Hume's texts, and he is able to combine his sharp focus on the details of Hume's arguments with a panoramic view of Hume's project. … [A]n important and interesting contribution to Hume scholarship that will be valuable for both specialists and newcomers to Hume." - Deborah Boyle, Notre Dame Philosophical Reviews

"Don Garrett is among the most distinguish and influential figures currently working on Hume and early modern philosophy. This is an important and illuminating contribution which will be received with considerable enthusiasm and interest by both specialists and the general reader. I expect it to rapidly establish itself as the standard general study of Hume's philosophy." - Paul Russell, University of British Columbia, Canada

"This is an outstanding, incredibly stimulating book. It contains ground-breaking discussions within its pages, including the attention paid to Hume’s account of mental representation, the centrality in Hume of what Garrett calls ‘sense-based’ concepts, and a fascinating reconstruction of Hume’s naturalistic account of normativity. It will be studied and debated for years to come." - P. J. E. Kail, University of Oxford, UK

"The best introductory treatment of Hume’s philosophy on the market. More than this, Garrett shows how Hume’s project is unified by the common structure of the senses - including moral and ‘causal’ senses - which shape our conceptions of the world, and enable our critical engagement with it." - Donald C. Ainslie, University of Toronto, Canada

"An elegant, accessible, and well-grounded treatment of the central themes in David Hume’s philosophy. Garrett provides an illuminating account of the role that skeptical themes play in Hume’s position without, as some have, minimizing them. His grasp and admiration of Hume’s writings is evident throughout this work, yielding a central contribution to Hume scholarship." - Robert Fogelin, Dartmouth College, USA

"...Garrett’s new book, Hume, will not disappoint, especially those eager to find a summation of his views as they have developed since the publication of Cognition and Commitment (1997) some two decades ago. The book reflects ‘modifications’ of his past interpretations, as Garrett himself puts it, along with ‘significant new elements, both large and small’ (xxi), the whole presented in a distinctive style reflecting his conviction that the ‘philosophical history of philosophy’ is most fruitfully pursued by ‘mixing of historical and contemporary terminology’" - Timothy M. Costelloe, College of William & Mary, Journal of Scottish Philosophy