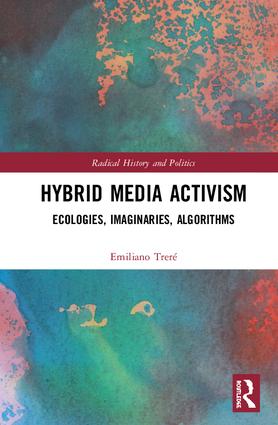 This book is an extensive investigation of the complexities, ambiguities and shortcomings of contemporary digital activism. The author deconstructs the reductionism of the literature on social movements and communication, proposing a new conceptual vocabulary based on practices, ecologies, imaginaries and algorithms to account for the communicative complexity of protest movements. Drawing on extensive fieldwork on social movements, collectives and political parties in Spain, Italy and Mexico, this book disentangles the hybrid nature of contemporary activism. It shows how activists operate merging the physical and the digital, the human and the non-human, the old and the new, the internal and the external, the corporate and the alternative.

The author illustrates the ambivalent character of contemporary digital activism, demonstrating that media imaginaries can be either used to conceal authoritarianism, or to reimagine democracy. The book looks at both side of algorithmic power, shedding light on strategies of repression and propaganda, and scrutinizing manifestations of algorithms as appropriation and resistance.

The author analyses the way in which digital activism is not an immediate solution to intricate political problems, and argues that it can only be effective when a set of favourable social, political, and cultural conditions align.

Assessing whether digital activism can generate and sustain long-term processes of social and political change, this book will be of interest to students and scholars researching radical politics, social movements, digital activism, political participation and current affairs more generally.

"This is a timely and most needed book to broaden the discussion about the intricate relationship between social movements and communication technologies. Treré’s Hybrid Media Activism delivers a poignant critique of the shortcomings in previous theorizations of the role of media and communications in social movements. Based on sound research that provides readers with first-hand information from diverse movements, contexts and practices the author develops three innovative concepts—ecologies, imaginaries and algorithms—to offer new analytical tools that allow for a hybrid, complex, multi-faceted understanding of Media Activism." - Claudia Magallanes-Blanco, Professor of Communications, Universidad Iberoamericana Puebla, co-editor of the Routledge book series Media and Communication Activism: The Empowerment Practices of Social Movements

"This remarkable book is a highly original feat of theoretical synthesis and cross-cultural research. It will transform our understanding of the elusive relationship between communication and activism in the digital age. Essential reading for students and scholars of social movements." - John Postill, Senior Lecturer in Communication at RMIT University, Melbourne, author of The Rise of Nerd Politics (Pluto, 2018)

trains a sharp eye on the relationship between social movements and media technology and explores the paradoxical ways digital communication both brings us together and tears us apart. Treré surveys the wealth of academic disciplines and research methodologies brought to the topic over the last two decades and offers fresh empirical research on the role technology has played in the work of social movements gathering steam in Mexico, Italy and Spain. Theoretically sophisticated and empirically rich, this book takes the measure of shifting territory on our whirling mediated planet." - Adrienne Russell, Mary Laird Wood Professor of Communication, University of Washington Seattle, author of Journalism as Activism: Recoding Media Power (Polity, 2017)

"In this theoretically innovative and empirically rich volume, Emiliano Treré convincingly develops a practice based ecological understanding of the complex and hybrid communication in social movements. Bringing agency back into the analysis, he investigates the technological appropriation, media imaginaries and algorithmic (counter)power of activists in their interaction with communication technologies from everyday life to institutional politics." - Professor Donatella Della Porta, Dean of the Department of Political and Social Sciences and Director of the Centre of Social Movements Studies, Scuola Normale Superiore, Florence

"Creative, insightful and multidisciplinary. Treré's Hybrid Media Activism will be a landmark book to understand the continuities and changes in the relationship between social movements and communication practices in the digital era." - Rodrigo Gómez, Professor in Communication Industries and Policies, Universidad Autónoma Metropolitana Cuajimalpa, Ciudad de México, editor of Global Media Giants (Routledge, 2016)

"Emiliano Treré has emerged in recent years as one of the smartest analysts of contemporary social movements, combining a sophisticated grasp of social and media theory with rigorous comparative fieldwork. This lucid and extremely well-structured book is a landmark intervention into how we understand both the limits and promise of networked resistance." - Nick Couldry, Professor of Media, Communications and Social Theory, London School of Economics and Political Science, UK. Author, Media Society World (Polity, 2012).

"Treré is able to marshal his empirical materials in support of complex conceptual points…the text deserves to be a future touchstone for those seeking to conceptualize the role media technologies play in political practice." - Eva Giraud, Keele University

Introduction: the quest for communicative complexity within social movements

Chapter 2. An ecological exploration of the ‘Anomalous Wave’ movement

Chapter 3. An ecological exploration of the #YoSoy132 movement

Chapter 5. The authoritarian sublime of the Five Star Movement

Chapter 6. The technopolitical sublime of the Spanish Indignados

Chapter 7. The mutual shaping of algorithms and social movements

Emiliano Treré is Lecturer in the School of Journalism, Media and Culture at Cardiff University, UK.

The series Routledge Studies in Radical History and Politics has two areas of interest. Firstly, this series aims to publish books which focus on the history of movements of the radical left. ‘Movement of the radical left’ is here interpreted in its broadest sense as encompassing those past movements for radical change which operated in the mainstream political arena as with political parties, and past movements for change which operated more outside the mainstream as with millenarian movements, anarchist groups, utopian socialist communities, and trade unions. Secondly, this series aims to publish books which focus on more contemporary expressions of radical left-wing politics. Recent years have been witness to the emergence of a multitude of new radical movements adept at getting their voices in the public sphere. From those participating in the Arab Spring, the Occupy movement, community unionism, social media forums, independent media outlets, local voluntary organisations campaigning for progressive change, and so on, it seems to be the case that innovative networks of radicalism are being constructed in civil society that operate in different public forms.

The series very much welcomes titles with a British focus, but is not limited to any particular national context or region. The series will encourage scholars who contribute to this series to draw on perspectives and insights from other disciplines.