Hybrid Media Culture
Sensing Place in a World of Flows 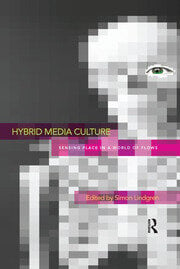 Hybrid Media Culture: Sensing Place in a World of Flows

The distinction between online and offline realities is becoming more and more difficult to sustain. As computer-mediated communication evolves and as interaction becomes more and more dependent on the Internet, social, cultural, and political aspects begin to get caught and entangled in the web of contemporary digital communication technologies. Digital tools and platforms for communication are progressively becoming commonplace, while the cultural conceptions that surround these technologies‚Äîimmediacy, constant accessibility, availability‚Äîare becoming increasingly mainstream.

is an interdisciplinary exploration of how the online and the offline interact in present-day culture. In the aftermath of all-encompassing perspectives on ‚Äòpostmodernisation‚Äô and ‚Äòglobalization‚Äô, there is now a pressing need for scholars of new media and society to come to terms with issues of place, embodiment, and materiality in a world of ‚Äòvirtual‚Äô flows and ‚Äòcyber‚Äô culture. This book explores ways of conceptualizing the intricate intermingling of the online and the offline through case studies of hybrid media places, including: user-generated videos about self-harm; visibility, surveillance and digital media; digital communication tools and politics; and physical and virtual churches.

This interdisciplinary edited collection investigates the effects of the internet and digital culture on perceptions and uses of identities, bodies and localities. It will be of interest to students and scholars of digital culture, sociology, media and communications studies, new media, body studies, politics, and science and technology studies.

Simon Lindgren is Professor of Sociology at Ume√• University, Sweden. He researches digital culture with a focus on social connections, social organization and social movements. His publications cover themes like hacktivism, digital piracy, subcultural creativity and learning, popular culture and visual politics. Simon is the author of New Noise: A Cultural Sociology of Digital Disruption (2013).