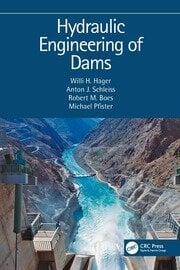 Hydraulic engineering of dams and their appurtenant structures counts among the essential tasks to successfully design safe water-retaining reservoirs for hydroelectric power generation, flood retention, and irrigation and water supply demands. In view of climate change, especially dams and reservoirs, among other water infrastructure, will and have to play an even more important role than in the past as part of necessary mitigation and adaptation measures to satisfy vital needs in water supply, renewable energy and food worldwide as expressed in the Sustainable Development Goals of the United Nations.

This book deals with the major hydraulic aspects of dam engineering considering recent developments in research and construction, namely overflow, conveyance and dissipations structures of spillways, river diversion facilities during construction, bottom and low-level outlets as well as intake structures. Furthermore, the book covers reservoir sedimentation, impulse waves and dambreak waves, which are relevant topics in view of sustainable and safe operation of reservoirs.

The book is richly illustrated with photographs, highlighting the various appurtenant structures of dams addressed in the book chapters, as well as figures and diagrams showing important relations among the governing parameters of a certain phenomenon. An extensive literature review along with an updated bibliography complete this book.

Willi H. Hager has been Emeritus Professor at ETH Zurich since 2016. He gained both his engineering Diploma (1976) and his PhD title (1982) from ETH Zurich. After 6 years as post-doc research engineer at EPF Lausanne, he in 1989 returned to VAW, ETH Zurich as research head. He obtained there in 1994 the title Privat-Docent, and in 1998 the professor title. During his career, he was interested in researches on hydraulics, hydraulic structures, wastewater hydraulics, high-speed flows, erosion and scour, impulse waves, and dike overtopping. He in addition took interest in the history of hydraulics. He has published/edited dozens of book in the above topics, and hundreds of peer-reviewed journal papers. He was awarded, among other, the Ippen Award and Honorary Membership (both from IAHR), the Best Technical Note Award and the Hydraulic Structures Medal (both from ASCE).

Anton J. Schleiss graduated in Civil Engineering from ETH in Zurich, Switzerland and obtained a PhD on the pressure tunnel design. He worked for 11 years with an International Engineering Consulting Company in Zurich and was involved in the design of many hydro projects around the world as an expert in hydraulic engineering and project manager. In 1997, he was nominated full professor and director of the Laboratory of Hydraulic Constructions, EPFL. Until he became honorary professor in 2018, he supervised more than 50 PhD and Postdoc research projects in the field of water infrastructure. He was listed in 2011 among the 20 international personalities that "have made the biggest difference to the sector Water Power & Dam Construction over the last 10 years". For his outstanding contributions to advance the art and science of hydraulic structures engineering he obtained in 2015 the ASCE-EWRI Hydraulic Structures Medal. After having served as vice-president between 2012 and 2015, he was president of the International Commission on Large Dams (ICOLD) from 2015 to 2018. With more than 40 years of experience he is regularly involved as an expert in large water infrastructure projects including hydropower and dams all over the world.

Robert Boes studied civil engineering in Germany and France, graduating from the Technical University of Munich in 1996. He then became a research engineer at ETH Zurich (Switzerland), obtaining a Doctorate in hydraulic engineering in 2000. After a postdoctoral research period at ETH Zurich, he joined in 2002 the Hydro Engineering Department of the Tyrolean Utility TIWAG in Innsbruck, Austria, where he was involved in various projects relating to hydropower schemes, hydraulics and flood protection and became head of the Dam Construction Group. In 2009, he was appointed Professor for Hydraulic Structures at ETH Zurich, where he directs the Laboratory of Hydraulics, Hydrology and Glaciology (VAW). He is vice-president of the Swiss National Committee on Dams and a board member of the Swiss Association for Water Resources Management, and the Energy Science Council at ETH Zurich. He is work package leader "Hydropower" of the Swiss Competence Center for Energy Research – Supply of Electricity, and is involved with dam and flood protection projects in Switzerland and abroad. His research interests are mainly related to dam hydraulics and dam safety, reservoir sedimentation, impulse waves, hydropower & environment, sediment monitoring, hydro-abrasive wear of hydraulic structures and machinery, and flood protection.

Michael Pfister graduated in Civil Engineering from ETH Zurich, Switzerland, in 2002. He then joined the Laboratory of Hydraulics, Hydrology and Glaciology (VAW) at ETH Zurich. In 2007, he obtained a Doctorate in Sciences. In 2010, he joined the Laboratory of Hydraulic Constructions (LCH) of EPFL, Switzerland, as a Research and Teaching Associate. There, he initiated research axes and advised PhD students, was a Lecturer and a project manager for hydropower-related model studies. The Haute école d'ingénierie et d'architecture Fribourg (HEIA-FR, HES-SO), Switzerland, appointed him in 2016 as Professor for Hydraulic Engineering. During his activities, Michael was responsible for research projects on high-speed two-phase flows, on Piano Key weirs, on urban drainage structures, and on wave dynamics. Physical modelling was the main approach for many of his research issues. He was active in consulting and supervised several applied physical model studies conducted for dam owners. Michael has published dozens of peer-reviewed journal papers and served as editor of several books in the above-mentioned topics. He is a member of various national and international committees and associations.