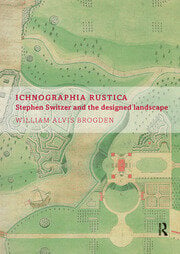 One of the most significant occurrences in the history of design was the creation of the English Landscape Garden. Accounts of its genesis…the surprising structural change from the formal to a seeming informal are numerous. But none has ever been quite convincing and none satisfactorily placed the contributions of Stephen Switzer.

Unlike his contemporaries, Switzer - an 18th century author of books on gardening and agricultural improvement - grasped a quite new principle: that the fashionable pursuit of great gardens should be "rural and extensive", rather than merely the ornamentation of a particular part of an estate. Switzer saw that a whole estate could be enjoyed as an aesthetic experience, and by the process of improving its value, could increase wealth. By encouraging improvers to see the garden in his enlarged sense, he opened up the adjoining countryside, the landscape, and made the whole a subject of unified design. Some few followed his advice immediately, such as Bathurst at Cirencester. But it took some time for his ideas to become generally accepted.

Could this vision, and its working out in practice between 1710 and 1740 be the very reason for such changes? 300 years after the first volume of his writings began to be published; this book offers a timely critical examination of lessons learned and Switzer’s roles. In major influential early works at Castle Howard and Blenheim, and later the more "minor" works such as Spy Park, Leeswood or Rhual, the relationships between these designs and his writings is demonstrated. In doing so, it makes possible major reassessment of the developments, and thus our attitudes to well-known works. It provides an explanation of how he, and his colleagues and contemporaries first made what he had called Ichnographia Rustica, or more familiarly Modern Gardening from the mid-1740s, land later landscape gardens.

It reveals an exceptional innovator, who by transforming the philosophical way in which nature was viewed, integrated good design with good farming and horticultural practice for the first time. It raises the issue of the cleavage in thought of the later 18th century, essentially whether the ferme ornee as the mixture of utile and dulci was the perfect designed landscape, or whether this was the enlarged garden with features of "unadorned nature"? The book discusses these considerable and continuing contrary influences on later work, and suggests Switzer has many lessons for how contemporary landscape and garden design ought be perceived and practised.

Introduction , 1. A Fine Genius for Gardening, 2. Towards a Rural and Farm-like Way of Gardening, 3. Early Landscapes, 4. Country Practice, Nature to Advantage Dress'd, 5. A Public Figure, 6. Essays in the Landscape Style , 7. Furor Hortensis, 8. Legacy.

William Alvis Brogden is an architectural historian, critic and consultant based in Aberdeen. He has served on the councils of the National Trust for Scotland, the Garden History Society and the Architectural Heritage Society of Scotland. His interests in architecture are wide and include landscape, old buildings and towns. He has fought to enhance the city of Aberdeen and to protect its very strong architectural heritage from foolish depredation, and occasionally is called on to advise on historic interiors, the reclamation of old gardens and the expansion of designed townscapes. He taught student architects in these subjects until his retirement. His recent book A City’s Architecture: Aberdeen as Designed City (Ashgate) was published in 2012. The same year saw the fourth edition of his Aberdeen: An Illustrated Architectural Guide (Rutland).

Brogden’s approach is chronological. Each chapter identifies stages in Switzer’s progress, with discussions of sites relevant to that period of his career. Thus the first sees him outlining Switzer’ debts to the classics and then, rather cursorily, a cluster of contemporary writers, before moving on to his apprenticeship with London and Wise at Brompton Park Nurseries.

At this stage it is hard to see what exactly, if anything, Switzer designed. His writings that talk about key sites –Cassiobury, Castle Howard’ Ray Wood –tell us more about his early ideas on rural gardening than what he did himself to implement them. He worked at Blenheim (digging the foundations for Vanbrugh’ bridge), and formed the gravel pit at Kensington Palace into an amphitheatre.

Dr William Brogden’s biography of Stephen Switzer fills a wide gap in the history of the English landscape garden during the first half of the eighteenth century. Switzer, uniquely, was celebrated as the author of practical and theoretical books on garden design, as well as a collaborator with Charles Bridgeman, Sir John Vanbrugh, and other pioneers.

To make his case, Brogden considers the writings of other scholars, and brings together a range of published, manuscript, and pictorial sources to assess Switzer’s role in the design of the landscapes of Blenheim Palace, Castle Howard, Lumley |Castle and elsewhere. In so doing, Brogden makes a major contribution to our understanding of their evolution. All told, this is an important and original book.

The name Switzer reminds me of my writing up the domestic buildings for Pevsner's Lincolnshire in 1960. I was at Grimsthorpe having enjoyed Lord Ancaster's lunch, and we were standing on the terrace on the garden side of the house, when Ancaster asked, who would have designed the garden, an old formal one that had been landscaped late in the 18th century? My reply was that it could have been Stephen Switzer the author of a treatise called Ichnographica Rustica. Alas, then there was no Bill Brogden to observe in his new and exciting book that Switzer had invented a new landscape design called 'rural and extensive', gardening, intended that a whole estate could be opened up to the surrounding countryside. Rightly Brogden observes that this is a very modern concept, anticipating landscape design in our own day.

John Harris, Curator of the Drawings Collection of the RIBA

Switzer is the mystery man of landscape history no more, this new study reveals his innovative ideas which will inspire designers in all land management disciplines

George William Johnson remarks in his History of Gardening (1829) that neglect has pursued Switzer ‘beyond the grave, for his works are seldom mentioned and quoted as authorities of the age he lived in’. He was ‘the best author of his time’ and among the ‘Classic Authors of Gardening’. Modest and candid, he was a ‘sound, practical Horticulturist, a man well versed in Botanical Science of the day, in its most enlarged sense’. This glowing assessment still holds true today: Switzer is among the most original, eloquent, informed and influential garden writers and practitioners of eighteenth-century England, yet his written and practical work has been overshadowed by the achievements of his contemporaries. Brogden’s long-awaited book redresses this deficiency, supplying the first detailed account of this ingenious landscape improver and his rich and varied contribution to contemporary landscape theory and practice. Ichnographia Rustica: Stephen Switzer and the Designed Landscape will ensure that Switzer is finally admitted to the pantheon of British garden greats, and that his name should soon become as familiar as his fellow ‘landskip improvers’ William Kent, Charles Bridgeman and Humphry Repton.