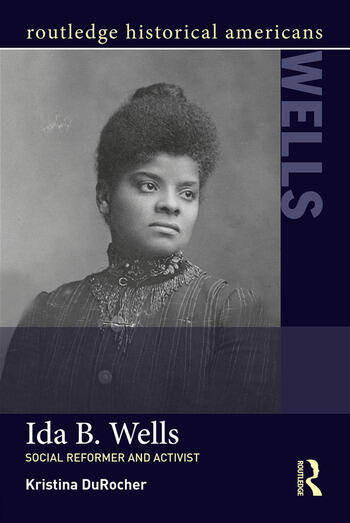 Born into slavery in 1862, Ida B. Wells went on to become an influential reformer and leader in the African American community. A Southern black woman living in a time when little social power was available to people of her race or gender, Ida B. Wells made an extraordinary impact on American society through her journalism and activism. Best-known for her anti-lynching crusade, which publicly exposed the extralegal killings of African Americans, Wells was also an outspoken advocate for social justice in issues including women's suffrage, education, housing, the legal system, and poor relief.

In this concise biography, Kristina DuRocher introduces students to Wells's life and the historical issues of race, gender, and social reform in the late 19th- and early 20th-century U.S. Supplemented by primary documents including letters, speeches, and newspaper articles by and about Wells, and supported by a robust companion website, this book enables students to understand this fascinating figure and a contested period in American history.

Kristina DuRocher is an Associate Professor of History at Morehead State University, Kentucky.

"Kris Durocher’s biography of the remarkable Ida Wells-Barnett analyzes the complexities of a life that went against the gender and racial roles of the day. Because defiance contradicted her status as a lady, Wells-Barnett was often criticized, misjudged, and misunderstood, and Durocher provides crucial context for understanding the difficulties and tensions of a life devoted to fighting against the emerging system of Jim Crow. Durocher explores in fine detail how Wells-Barnett debunked the rape-lynch rhetoric thereby exposing lynchings as acts to maintain white patriarchy and the power it bestowed. With a vivid narrative and impeccable research, Durocher brilliantly brings to life the charm, the stubbornness, and the grit of this brilliant and earnest woman."

"Kristina Anne Durocher presents readers a new, provocative look at the life, career, and legacy of Ida B. Wells, the fearless social justice crusader known to some as "the Princess of the Press" and a "Modern Joan of Arc." Durocher’s comprehensive account provides rich context to the nuanced narrative of Wells’s life story, drawing on a wide array of primary and secondary sources. The volume offers a fresh, upbeat interpretation of Wells-Barnett’s career in Chicago, which had previously been characterized in defeatist terms, and encourages an academic intervention in restoring Wells’s legacy, one that was tarnished by the conflicts of her time. Durocher’s account accurately characterizes the life of Wells as one that "illuminates issues of race, gender, class, religion, politics, region, and reform … is interwoven into the history of the United States as it confronted the challenges of a modern world," and offers a new lens for understanding one of the most complicated, dynamic figures to bridge the last two centuries. Bravo!"