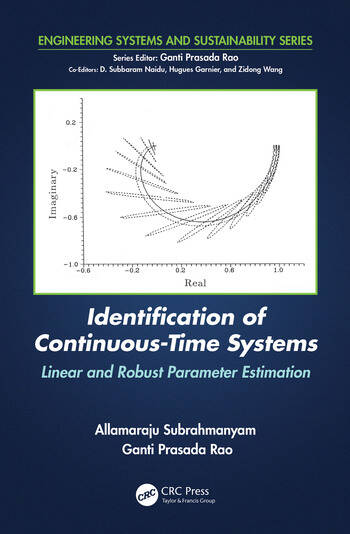 Models of dynamical systems are required for various purposes in the field of systems and control. The models are handled either in discrete time (DT) or in continuous time (CT). Physical systems give rise to models only in CT because they are based on physical laws which are invariably in CT. In system identification, indirect methods provide DT models which are then converted into CT. Methods of directly identifying CT models are preferred to the indirect methods for various reasons. The direct methods involve a primary stage of signal processing, followed by a secondary stage of parameter estimation. In the primary stage, the measured signals are processed by a general linear dynamic operation—computational or realized through prefilters, to preserve the system parameters in their native CT form—and the literature is rich on this aspect.

In this book: Identification of Continuous-Time Systems-Linear and Robust Parameter Estimation, Allamaraju Subrahmanyam and Ganti Prasada Rao consider CT system models that are linear in their unknown parameters and propose robust methods of estimation. This book complements the existing literature on the identification of CT systems by enhancing the secondary stage through linear and robust estimation.

In this book, the authors

This modest volume is intended to be a useful addition to the literature on identifying CT systems.

Subbu is currently a Vice President of Technology at the Expedia Group, based in Seattle, Washington State, USA, where he leads several technology initiatives. His areas of current work include cloud computing, distributed systems, and automation of large-scale systems. He is a frequent speaker at various technology conferences on these topics. He also volunteers his time as an Expert-in-Residence at RippleWorks providing guidance for non-profits and social ventures.

Prior to his current role, Subbu was a Distinguished Engineer at eBay Inc. for five years, where he helped build eBay’s private cloud platform across multiple data centers. He also served in various software engineering roles in other technology companies like BEA Systems (now part of Oracle Corporation), Yahoo Inc., Wipro Infotech, and Computervision (now part of Parametric Technology Corporation).

Over the many years of his work in the USA he published four books:

received the B.E. degree in Electrical Engineering from Andhra University, India in 1963, M.Tech. (Control Systems Engineering) and Ph.D. degrees in Electrical Engineering in 1965 and 1970 respectively, both from the Indian Institute of Technology (IIT), Kharagpur, India. From July 1969 to October 1971, he was with the Department of Electrical Engineering, PSG College of Technology, Coimbatore, India, as an Assistant Professor. In October 1971 he joined the Department of Electrical Engineering, IIT Kharagpur as an Assistant Professor and was a Professor there from May 1978 to June 1997. From May 1978 to August 1980, he was the Chairman of the Curriculum Development Cell (Electrical Engineering) established by the Government of India at IIT Kharagpur. From October 1975 to July 1976, he was with the Control Systems Centre, University of Manchester Institute of Science and Technology (UMIST), Manchester, England, as a Commonwealth Postdoctoral Research Fellow. During 1982-1983, 1985, 1991, 2003, 2004, 2007, and 2009, he visited the Lehrstuhl für Elektrische Steuerung und Regelung, Ruhr-Universität Bochum, Germany as a Research Fellow of the Alexander von Humboldt Foundation. He visited the Fraunhofer Institut für Rechnerarchitectkur und Softwaretchnik (FIRST) Berlin, in 2003, 2004, 2007 2009, and 2011. He was a visiting professor in 2003 at University Henri Poincare, Nancy, France, and Royal Society sponsored Visiting Professor at Brunel University, UK in 2007. During 1992-1996 he was Scientific Advisor to the Directorate of Power and Desalination Plants, Water and Electricity Department, Government of Abu Dhabi and the International Foundation for Water Science and Technology where he worked in the field of desalination plant control. He is presently a Member of the UNESCO-EOLSS Joint Committee.

He is/was on the Editorial Boards of International Journal of Modeling and Simulation, Control Theory and Advanced Technology (C-TAT), Systems Science (Poland), Systems Analysis Modeling and Simulation (SAMS), International Journal of Advances in Systems Science and Applications (IJASSA) and The Students' Journal of IETE (India). He was Guest Editor of three Special Issues: one of C-TAT on Identification and Adaptive Control - Continuous time approaches, Vol.9, N0.1, March 1993, and The Students' Journal of IETE on Control, Vols. I&II, 1992-93, System Science, Special Issue dedicated to Z. Bubnicki, Volume 33, No.3, 2007. He organized several invited sessions in IFAC Symposia on Identification and System Parameter Estimation, 1988, 1991, 1994 and World Congress 1993. He was a member of the International Program Committees of these Symposia during 1988-1997. He was a member of the IFAC Technical Committee on Modelling, Identification and Signal Processing in 1996. He was Chairman of the Technical Committee of the 1989 National Systems Conference in India. He is co-editor (with Achim Sydow) of the book series "Numerical Insights Series" published by Taylor and Francis. He is a member of the International Advisory Boards of the International Institute of General Systems Science (IGSS), Systems Science Journal (Poland) and International Congresses of World Organisation of Systems and Cybernetics (WOSC).

Since 1996, Prof. Rao has been closely associated with the development of the Encyclopedia of Desalination and Water Resources (DESWARE) (

www.desware.net) and Encyclopedia of Life Support Systems (EOLSS), developed under the auspices of the UNESCO (www.eolss.net)..

He received several academic awards including the IIT Kharagpur Silver Jubilee Research Award 1985, The Systems Society of India Award 1989, International Desalination Association Best Paper Award 1995 and Honorary Professorship of the East China University of Science and Technology, Shanghai. He was elected to the Fellowship of the IEEE with the citation ' FOR DEVELOPMENT OF CONTINUOUS TIME IDENTIFICATION TECHNIQUES'. The International Foundation for Water Science and Technology has established the ‘Systems and Information Laboratory’ in the Electrical Engineering Department at the Indian Institute of Technology, Kharagpur, in his honor.