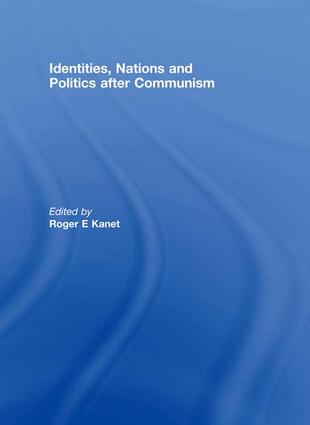 Identities, Nations and Politics after Communism

This book focuses on questions of identity that have confronted the countries of Central and Eastern Europe after the collapse of the communist system that had previously provided them with an identity.

This development both facilitated and necessitated a reassessment of the now independent nations’ history, orientation, symbols and identity. In some cases, new states were created without a clear national identity, while in others the nation was regaining statehood, but not always within borders that had an historical association with the nation concerned. The multiethnic character of the space of the former Soviet Union and its erstwhile "satellites," and the long historical legacy of complex relations, boundary changes, population migration, and economic and social changes presented different challenges to the various nations and states concerned.

The essays in this volume attempt to elucidate and understand the issues of ethnic and national identity and their relationship to the emerging statehood in various regions of the post-communist world. This study makes clear that some nation-states were far better prepared to handle these issues than others, and that the longer-term impact of the communist experience has varied.

1 Identities and Nations in the Post-Communist World

2. Are You Hungarian or Bulgarian: National and Ethnic identity in Central and Eastern Europe?

3. The Caucasian Connection: Identity Tensions in the Ballets of Aram Khachaturian

4. Representing the Empire – the Meaning of Siberia for Russian Imperial Identity

6. (Re-)Construction of Collective Identities After the Dissolution of the Soviet Union: Russian-Speakers in Estonia

9. The Nature of Russia’s Identity: ‘Russia and the West’ in Post-Soviet Culture

Roger E. Kanet is Professor of International Studies at the University of Miami, Coral Gables. He has published widely on communist and postcommunist Europe. His most recent publications include From Superpower to Besieged Global Power: Restoring World Order after the Failure of the Bush Doctrine (Georgia, 2008); Russia, Re-Emerging Great Power (Palgrave Macmillan, 2007); The New Security Environment. The Impact on Russia, Central and Eastern Europe (Ashgate, 2005); Resolving Regional Conflicts (Illinois, 1998); Post-Communist States in the World Community (Macmillan/St. Martin’s, 1998); and The Foreign Policy of the Russian Federation (Macmillan/St. Martin’s, 1997). Kanet has served as Dean of the School of International Studies at the University of Miami and earlier as Associate Vice-Chancellor and Director of International Programs and Studies at the University of Illinois at Urbana-Champaign.

Association for the Study of Nationalities

The books in this series focus on the dynamics and interactions of significant minority and majority nationalisms in the context of globalisation and their social, political and economic causes and consequences. Each book is focused on an important topic drawn from the rigorously peer-reviewed articles published in Nationalities Papers and Ethnopolitics, and includes authoritative theoretical reflection and empirical analysis by some of the most widely recognized experts in the world.