Identity, Inequity and Inequality in India and China
Governing Difference 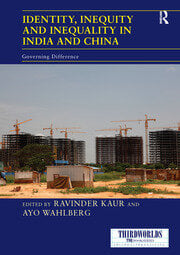 Identity, Inequity and Inequality in India and China: Governing Difference

This volume explores how difference is constructed, manifested, mobilised and obscured in socially uneven societies, particularly those fuelled by neoliberal economic growth in the recent years.

The book approaches difference as a double edged concept that allows one to make sense of the tensions that are played out between ‘cosmopolitan’ convergence and ‘multicultural’ diversity, between expanding middle classes and increasingly disenfranchised poor groups, between the global and the local. The chapters in this volume present a series of empirical explorations of how difference is articulated, desired, levelled, governed and even subverted in the socio-economically uneven landscapes of India and China. They examine how difference emerges out of daily practice, categorisation processes, dividing practices, nation building efforts and identity projects.

Through these empirical studies, we see how difference is articulated along a number of axes: differentiations of groups or persons according to hierarchies of superiority/inferiority; the demarcation of difference as something that is potentially disruptive and therefore in need of containment; the ‘celebration’ of difference as diversity, and finally, the ways in which difference comes to be internalised in the shaping of individual identities. Another common theme that binds a number of contributions is the exploration of the role of the state in constructing and controlling these differences, and the ways in which these interventions rearrange the social-political landscapes.

This book was published as a special issue of Third World Quarterly.

1. Governing Difference in India and China: an introduction  2. Imperial Modernity: history and global inequity in rising Asia  3. Nation’s Two Bodies: rethinking the idea of ‘new’ India and its other  4. China as an ‘Emerging Biotech Power’  5. Post-colonial Renaissance: ‘Indianness’, contemporary art and the market in the age of neoliberal capital  6. Making Gujarat Vibrant: Hindutva, development and the rise of subnationalism in India  7. Between Egalitarianism and Domination: governing differences in a transitional society  8. Rule through Difference on China’s Urban–Rural Boundary  9. ‘Winning Hearts and Minds’: emotional wars and the construction of difference  10. Religion, Secularism and National Development in India and China  11. Between Party, Parents and Peers: the quandaries of two young Chinese Party members in Beijing

Ravinder Kaur is Associate Professor and Director of Centre for Global South Asian Studies, Department of Cross-cultural and Regional Studies, University of Copenhagen. She is currently responsible for a research programme funded by the Danish Social Sciences Research Council on the ongoing social-political transformations in post-reform India.

Ayo Wahlberg is Postdoctoral Research Fellow with the Asian Dynamics Initiative, Department of Anthropology, University of Copenhagen. Ayo has published widely at the cross-sections of science and technology studies and medical anthropology/sociology. His current research project is in the field of reproductive technologies in south central China where he is carrying out an ethnographic study of sperm banking. Ayo holds a PhD in sociology from the London School of Economics and was recently awarded a Sapere Aude Young Researcher award from the Danish Council of Independent Research.