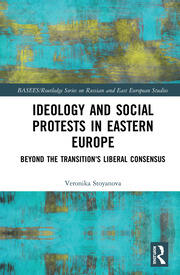 Ideology and Social Protests in Eastern Europe: Beyond the Transition's Liberal Consensus

This book argues that the recent political mobilizations in Eastern Europe have been underpinned by a class struggle between a more conservative and a more radical line of contention. The latter line, the book contends, is designed by and for subaltern groups whose anti-systemic programme calls for not just the eradication of corruption, but for more participatory forms of democracy, for social justice, and for freedom from want. The former, on the other hand, is designed by powerful groups of intellectuals, for the middle classes whom the intellectuals see as the historical strata capable of advancing the ‘catch-up’ projects of modernization and Europeanization which they zealously champion. Based on a critical examination of recent political struggles, including a detailed case study of the 2013 protests in Bulgaria which focuses particularly on their internal antagonisms and drawing on the social theories of Antonio Gramsci and Ernst Bloch, the book provides shrewd insights into class antagonisms in political mobilizations, the distortive nature of ideological constructions and utopian longings, and the factors which propel many people to support projects for social change.

2. Anti-populism and its critics: the battle over the ‘liberal consensus’

3. Classificatory struggles and civil society through the lens of Gramsci’s theory of hegemony and Bloch’s theory of ideology and utopia

4. The concept of civil society during the ‘transition’: its road to hegemony and its utopian surplus

5. Against the liberal consensus: a civil society of the people

6. In defence of the liberal consensus: civil society of the middle class

7. Hegemonic class struggles over the liberal consensus in the post-socialist context

Veronika Stoyanova is an Associate Lecturer in the Department of Social Policy, Sociology and Social Research at the University of Kent in Canterbury