Idolatry and the Colonial Idea of India
Visions of Horror, Allegories of Enlightenment 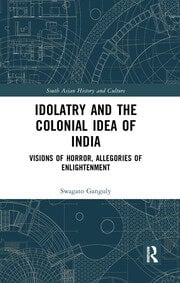 Idolatry and the Colonial Idea of India: Visions of Horror, Allegories of Enlightenment

This book explores literary and scholarly representations of India from the 18th to the early 20th centuries in South Asia and the West with idolatry as a point of entry. It charts the intellectual horizon within which the colonial idea of India was framed, tracing sources and genealogies which inform even contemporary descriptions of the subcontinent.

Using idolatry as a concept-metaphor, the book traverses an ambitious path through the works of William Jones, James Mill, Friedrich Max Müller, John Ruskin, Alice Perrin, E. M. Forster, Rammohan Roy and Bankimchandra Chatterjee. It reveals how religion and paganism, history and literature, Oriental thought and Western metaphysics, and social reform and education were unfolded and debated by them. The author underlines how idolatry, irrationality and social disorder came to be linked by discourses informed by Enlightenment, missionary rhetoric and colonial reason.

This book will appeal to scholars and researchers in history, anthropology, literature, culture studies, philosophy, religion, sociology and South Asian studies as well as anyone interested in colonial studies and histories of the Enlightenment.

Swagato Ganguly is currently Editorial Page Editor, The Times of India and is based in New Delhi, India. He was educated in Kolkata, Delhi and Philadelphia. He has been a fellow of the American Institute of Indian Studies, Chicago, and earned a doctoral degree in Comparative Literature and Literary Theory from the University of Pennsylvania, after which he took up a career in journalism.

"In his rich study of the Western imagination of India, Swagato Ganguly shows how the notion of ‘idolatry’ was established, and perceived, by eighteenth and nineteenth-century British historians and philosophers as the dark Other of Enlightenment thought. It gave evidence of an inherent irrationality that called for Western dominance, and justified colonial rule. This is an important book, both for an understanding of India's colonial past, and for cultural studies in general."

"In this wonderfully crafted piece of scholarship we have history, theology, literature and anthropology held comfortably together by the subject of idol worship. The play between indigenous customs and the colonial urge to culturally distance the ruler and the ruled, is brought out brilliantly. Truly, a great and rewarding read."

"Through this very important book, Swagato Ganguly explores how the colonial idea of India was driven, in substantial measure, by their approach to Indian idolatry. He does this through a scholarly analysis of the works of various colonial intellectual inquisitors. The colonial view of idolatry not only impacted the Indian intellectuals of the Raj era, but continues to impact discourse today. We need to reverse, even displace this discourse. A good first step would to read this book. Scholarly and much-needed."

Amish Tripathi, author of the Shiva Trilogy and other novels