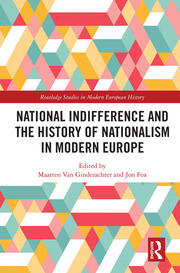 National indifference is one of the most innovative notions historians have brought to the study of nationalism in recent years. The concept questions the mass character of nationalism in East Central Europe at the turn of the nineteenth and twentieth century. Ordinary people were not in thrall to the nation; they were often indifferent, ambivalent or opportunistic when dealing with issues of nationhood.

As with all ground-breaking research, the literature on national indifference has not only revolutionized how we understand nationalism, over time, it has also revealed a new set of challenges. This volume brings together experienced scholars with the next generation, in a collaborative effort to push the geographic, historical, and conceptual boundaries of national indifference 2.0.

Introduction. National indifference and the history of nationalism in modern Europe

Too much on their mind. Impediments and limitations of the national cultural project in nineteenth-century Belgium

From national indifference to national commitment and back: the case of the Trentine POWS in Russia during the First World War

Lost in transition? The Habsburg legacy, state- and nation-building, and the new fascist order in the Upper Adriatic

National indifference and the transnational corporation: the paradigm of the Bat’a Company

Between nationalism and indifference: the gradual elimination of indifference in interwar Yugoslavia

Paths to Frenchness: national indifference and the return of Alsace to France, 1919-1939

National indifference, statistics, and the constructivist paradigm: the case of the "Tutejsi" (‘the people from here’) in interwar Polish censuses

‘I have removed the boundaries of nations’: nation switching and the Roman Catholic Church during and after the Second World War

‘Citizen of the Soviet Union – it sounds dignified’. Letter writing, nationalities policy, and identity in the post-Stalinist Soviet Union

Conclusion: national indifference and the history of nationalism in modern Europe

is an Associate Professor at the Department of History of Antwerp University. He is the co-editor of Nationhood from below. Europe in the long nineteenth century (with Marnix Beyen, Palgrave-Macmillan, 2012) and Everyday nationalism’s evidence problem (themed section of Nations and Nationalism, vol. 24, issue 3, 2018, co-edited with Jon Fox).  His monograph The Everyday Nationalism of Workers: A Social History of Modern Belgium will appear with Stanford University Press in 2019.

is a Senior Lecturer in the School of Sociology, Politics, and International Studies and Assistant Director of the Centre for the Study of Ethnicity and Citizenship at the University of Bristol.