Illiberal Democracy in Indonesia
The Ideology of the Family State 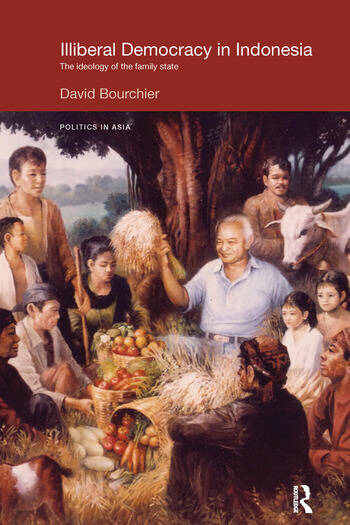 Illiberal Democracy in Indonesia: The Ideology of the Family State

Illiberal Democracy in Indonesia charts the origins and development of organicist ideologies in Indonesia from the early 20th century to the present. In doing so, it provides a background to the theories and ideology that informed organicist thought, traces key themes in Indonesian history, examines the Soeharto regime and his ‘New Order’ in detail, and looks at contemporary Indonesia to question the possibility of past ideologies making a resurgence in the country.

Beginning with an exploration of the origins of the theory of the organic state in Europe, this book explores how this influenced many young Indonesian scholars and ‘secular’ nationalists. It also looks in detail at the case of Japan, and identifies the parallels between the process by which Japanese and Indonesian nationalist scholars drew on European romantic organicist ideas to forge ‘anti-Western’ national identities and ideologies. The book then turns to Indonesia’s tumultuous history from the revolution to 1965, the rise of Soeharto, and how his regime used organicist ideology, together with law and terror, to shape the political landscape consolidate control. In turn, it shows how the social and economic changes wrought by the government’s policies, such as the rise of a cosmopolitan middle class and a rapidly growing urban proletariat led to the failure of the corporatist political infrastructure and the eventual collapse of the New Order in 1998. Finally, the epilogue surveys the post Soeharto years to 2014, and how growing disquiet about the inability of the government to contain religious intolerance, violence and corruption, has led to an increased readiness to re-embrace not only more authoritarian styles of rule but also ideological formulas from the past.

This book will be welcomed by students and scholars of Southeast Asia, politics and political theory, as well as by those interested in authoritarian regimes, democracy and human rights.

1. Starting Points 2. Organicism and the Volksgeist 3. The allure of Japan’s ‘family-state’ 4. 1945: Organicism versus rights 5. Revolution, democracy and corporatist antidotes 6. Against politics: Soeharto in power 7. Engineering Hegemony 8. Indonesianising Indonesia 9. Twilight of the ideologues 10. Conclusion

David Bourchier is Associate Professor of Asian Studies at The University of Western Australia.

"This is an exciting and highly original work that makes a major contribution to the history of Indonesian political thinking. One great strength is the complex link between German organicist and Dutch legal thinking and romantic Indonesian nationalism. Another is the story of the impact of Japanese political thinking from the 1920s to the 1940s. This work is rich and subtle, full of intriguing historical detail and insight. It is particularly relevant now, with the current renewed burst of hostility towards Western liberal democracy in Indonesia."
David Reeve, University of New South Wales, Australia

"At one level David Bourchier has given us a crucial analysis of the ideas and mechanisms behind Sukarno’s ‘Guided Democracy’ and Suharto’s enduring authoritarian-developmentalist state, which between them shaped Indonesia over its first half-century. At another it is of much broader significance, in tracing the lineage into Asia of one of the more influential alternatives to parliamentary democracy thrown up by the turbulent nineteenth and twentieth centuries.  Despite the undoubted successes of this democracy in Indonesia since 1998, we would be foolish to ignore the disenchantments with it and the continuing appeal of its rivals--in Indonesia as throughout Asia.  This exploration of one deep alternative current is as timely now as it ever was.

"I am thrilled to see the publication of this book. It is arguably the most important work yet produced on the genesis of modern Indonesian political ideology.  While a first-rate analysis of Indonesia, it will be of interest to anyone who seeks to understand the complex ways in which political ideologies are historically formed and reshaped, in varying social contexts, and in response to the shifting requirements of power."

"This is a strikingly original book which will be of great interest to all those interested in Indonesian political thinking and political developments over the last 90 years, as well as to students of corporatist/organicist thinking and practice in other countries. Bourchier writes with clarity and skill, effectively combining analysis of intellectual history with the practical politics on the ground... This is a remarkable book, essential reading for anyone who wants to have a thorough understanding of Indonesian political thinking and practice."