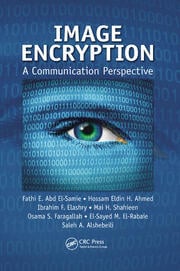 Since some ciphers were not designed for image encryption, the book explains how to modify these ciphers to work for image encryption. It also provides instruction on how to search for other approaches suitable for this task. To make this work comprehensive, the authors explore communication concepts concentrating on the orthogonal frequency division multiplexing (OFDM) system and present a simplified model for the OFDM communication system with its different implementations.

References
Appendix A
Appendix B
Index

Fathi E. Abd El-Samie received the BSc(Honors), MSc, and PhD degrees from Menoufia University, Menouf, Egypt, in 1998, 2001, and 2005, respectively. Since 2005, he has been a teaching staff member with the Department of Electronics and Electrical Communications, Faculty of Electronic Engineering, Menoufia University. He is currently a researcher at KACST-TIC in Radio Frequency and Photonics for the e-Society (RFTONICs). He is a co-author of about 200 papers in international conference proceedings and journals and four textbooks. His current research interests include image enhancement, image restoration, image interpolation, superresolution reconstruction of images, data hiding, multimedia communications, medical image processing, optical signal processing, and digital communications.

Dr. Abd El-Samie was a recipient of the Most Cited Paper Award from the Digital Signal Processing journal in 2008.

Hossam Eldin H. Ahmed received a BSC(Honors) in nuclear engineering in June 1969 (Faculty of Engineering, Alexandria University, Egypt); an MSc in microelectronic electron diffraction in April 1977 (Nuclear Department, Faculty of Engineering, Alexandria University); and a PhD in June 1983 (High Institute of Electronic and Optics, Paul Sabatier University, Toulouse, France). From 1970 to 1977, he was in the Egyptian marine forces. He was a demonstrator in 1977, teaching lectures and staff members with the Department of Electronic and Electrical Communications, Faculty of Engineering and Technology, Menoufia University. In 1993, he became a professor of microelectronics, VLSI design technology, communication systems, and computer networks. From 1993 until 1999, he was vice dean for education and student affairs at the Faculty of Electronic Engineering. In 2001, he became a chairman of the Electronics and Electrical Communications Department. He is a member of the Menoufia periodic electronic faculty journal and since 1995 has been the director, designer, and constructor of the Menoufia University wide-area network (WAN) (21 LANs). He is the developer of the Menoufia University libraries and FRCU universities libraries. His current research interests are electron microscopy; transmission and backscattering of electrons and ion beams into amorphous or polycrystalline targets; optical fibers; VLSI design; nanotechnology; lithography; digital, optical, and multimedia communications; digital images; multimedia and database communications; security applications; telemetry microcomputer applications in satellites; and OBC and satellite communications.

Ibrahim F. Elashry graduated from the Faculty of Engineering, Kafrelshiekh University, Egypt, in 2007. He is now a teaching assistant and PhD student at the University of Wollongong (UOW), Australia. His research interests are in security over wired and wireless networks and image processing.

Mai H. Shahieen graduated in May 2005 from the Faculty of Electronic Engineering, Menoufia University. Her 2011 MSc degree is in encrypted image transmission over wireless channels. She is now a PhD student at the Faculty of Electronic Engineering. Her research interests are broadband wireless distribution systems, image and video compression, multimedia systems, and wireless networks.

Osama S. Faragallah received BSc, MSc, and PhD degrees in computer science and engineering from Menoufia University, Menouf, Egypt, in 1997, 2002, and 2007, respectively. He is currently associate professor with the Department of Computer Science and Engineering, Faculty of Electronic Engineering, Menoufia University, where he was a demonstrator from 1997 to 2002 and assistant lecturer from 2002 to 2007. Since 2007, he has been a teaching staff member with the same department. His research interests are network security, cryptography, Internet security, multimedia security, image encryption, watermarking, steganography, data hiding, medical image processing, and chaos theory.

El-Sayed M. El-Rabaie (senior member, IEEE 1992, MIEE chartered electrical engineer) was born in Sires Elian (Menoufia), Egypt, in 1953. He received the PhD degree in microwave device engineering from the Queen’s University of Belfast in 1986. He was a postdoctoral fellow at Queen’s (Department of Electronic Engineering) until February 1989. In his doctoral research, he constructed a CAD (computer-aided design) package in nonlinear circuit simulations based on harmonic balance techniques. Since then, he has been involved in different research areas, including CAD of nonlinear microwave circuits, nanotechnology, digital communication systems, and digital image processing. He was invited in 1992 as a Research Fellow at North Arizona University (College of Engineering and Technology) and in 1994 as a visiting professor at Ecole Polytechnique of Montreal, Quebec, Canada. Professor El-Rabaie has authored and co-authored more than 130 papers and technical reports and 15 books. In 1993, he was awarded the Egyptian Academic Scientific Research Award (Salah Amer Award of Electronics), and in 1995, he received the award of the Best Researcher on CAD from Menoufia University. He acts as a reviewer and member of the editorial board for several scientific journals. He participated in translating the first part of the Arabic encyclopedia. Professor El-Rabaie was the head of the Electronics and Electrical Communications Engineering Department, Faculty of Electronic Engineering, Menoufia University, and then the vice dean of postgraduate studies and research in the same faculty. He currently is the vice dean of the Scientific Committee for Professors and Assistant Professors promotion in Egypt.

Saleh A. Alshebeili is professor and chairman (2001–2005) of the Electrical Engineering Department, King Saud University, Riyadh, Saudi Arabia. He has more than 20 years of teaching and research experience in the area of communications and signal processing. Dr. Alshebeili is a member of the board of directors of Prince Sultan Advanced Technologies Research Institute (PSATRI) and has been the vice president of PSATRI (2008–2011), the director of Saudi-Telecom Research Chair (2008–2012), and the director (2011–present) of the Technology Innovation Center, RF and Photonics in the e-Society (RFTONICS), funded by King Abdulaziz City for Science and Technology (KACST). Dr. Alshebeili has been on the editorial board of the Journal of Engineering Sciences of King Saud University (2009–2012). He also has active involvement in the review process of a number of research journals, KACST general directorate grants programs, and national and international symposiums and conferences.