Answering the need that exists for a single reference to address the practical issues of implementing Image-guided Radiation Therapy (IGRT) into prostate cancer treatment, Image-guided Radiation Therapy of Prostate Cancer provides clinicians with a solid understanding of this technology and, through in-depth illustrations and step-by-step guidelines, offers practical guidance on successfully employing IGRT to improve patient outcomes.

DAVID A. JAFFRAY is Head of Radiation Physics and a Senior Scientist within the Ontario Cancer Institute at Princess Margaret Hospital, Toronto, Ontario; and holds the Fidani Chair in Radiation Physics at the University of Toronto, Ontario. Dr. Jaffray received his Ph.D. in the Department of Medical Biophysics at the University of Western Ontario, London, Ontario. Dr. Jaffray has over 80 peer-reviewed publications in the field and holds numerous peer-reviewed and industry sponsored research grants. His current research interests focus on the development of novel approaches of directing and applying radiation therapy and advancing the standard of radiation therapy delivery. 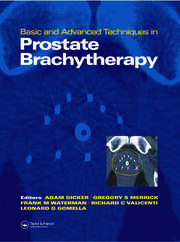