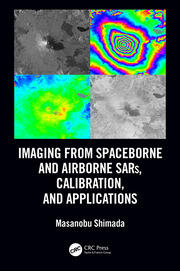 Sixty years after its birth, Synthetic Aperture Radar (SAR) evolved as a key player of earth observation, and it is continually upgraded by enhanced hardware functionality and improved overall performance in response to user requirements. The basic information gained by SAR includes the backscattering coefficient of targets, their phases (the truncated distance between SAR and its targets), and their polarization dependence. The spatiotemporal combination of the multiple data operated on the satellite or aircraft significantly increases its sensitivity to detect changes on earth, including temporal variations of the planet in amplitude and the interferometric change for monitoring disasters; deformations caused by earthquakes, volcanic activity, and landslides; environmental changes; ship detection; and so on. Earth-orbiting satellites with the appropriate sensors can detect environmental changes because of their large spatial coverage and availability.

This book is based on the author’s experience as a principal researcher at JAXA with responsibilities for L-band SAR operation and researches. It reveals the inside of SAR processing and application researches performed at JAXA, which makes this book a valuable reference for a wide range of SAR researchers, professionals, and students.

Masanobu Shimada (M’97–SM’04–F’11) received the BS and MS degrees in aeronautical engineering from Kyoto University in 1977 and 1979, and the PhD degree in electrical engineering from the University of Tokyo in 1999. He joined the National Space Development Agency of Japan (NASDA, former Japan Aerospace Exploration Agency (JAXA)) in 1979 and conducted the research projects for 34 years. During that, he made three achievements: 1) Sensor developments, i.e., Ku-band Scatterometer, Polarimetric Interferometric Airborne L-band SAR 1 and 2, 2) Operational Algorithm developments: SAR imaging, Interferometry, Polarimetry, Calibration, Mosaicking, and applications, 3) lead the science projects: the JERS-1 SAR calibration and validation (1992-1998), the JERS-1 Science project (Global rainforest and boreal forest mapping project and SAR interferometry for detecting the deformation distribution), the ALOS science project and PALSAR CALVAL, and the Kyoto and Carbon Initiative project using the time series PALSAR/PALSAR2 mosaics. His most impacted achievements are the deformation detection of the Hanshinn-Awaji-Earthquake using the JERS-1 SAR Interferometry, generation of world first global SAR mosaics that depicts the annual deforestation change, and experimental near real time deforestation monitoring using the ALOS/PALSAR ScanSAR.