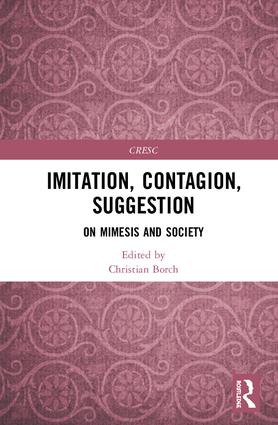 On Mimesis and Society, 1st Edition

Terrorist attacks seem to mimic other terrorist attacks. Mass shootings appear to mimic previous mass shootings. Financial traders seem to mimic other traders. It is not a novel observation that people often imitate others. Some might even suggest that mimesis is at the core of human interaction. However, understanding such mimesis and its broader implications is no trivial task. Imitation, Contagion, Suggestionsheds important light on the ways in which society is intimately linked to and characterized by mimetic patterns.

Taking its starting point in late-nineteenth-century discussions about imitation, contagion, and suggestion, the volume examines a theoretical framework in which mimesis is at the center. The volume investigates some of the key sociological, psychological, and philosophical debates on sociality and individuality that emerged in the wake of the late-nineteenth-century imitation, contagion, and suggestion theorization, and which involved notable thinkers such as Gabriel Tarde, Emile Durkheim, and Friedrich Nietzsche. Furthermore, the volume demonstrates the ways in which important aspects of this theorization have been mobilized throughout the twentieth century and how they may advance present-day analyses of topical issues relating to, e.g. neuroscience, social media, social networks, agent-based modelling, terrorism, virology, financial markets, and affect theory.

One of the significant ideas advanced in theories of imitation, contagion, and suggestion is that the individual should be seen not as a sovereign entity, but rather as profoundly externally shaped. In other words, the decisions people make may be unwitting imitations of other people’s decisions. Against this backdrop, the volume presents new avenues for social theory and sociological research that take seriously the suggestion that individuality and the social may be mimetically constituted.

1. The Imitative, Contagious, and Suggestible Roots of Modern Society: Towards a Mimetic Foundation of Social Theory

2. The Mimetic Unconscious: A Mirror for Genealogical Reflections

4. Mimesis as a Social Practice of Self-Education

Adaptations: The Proliferation of Mimetic Thought

7. ‘Charlie Hebdo’ and the Two Sides of Imitation

8. Viral Chatter and the Afterlife of Contagion

Part IV: Looking Back to Look Ahead: Rethinking Individuality and the Social

10. Unpacking I-C-S: Montaigne and the Project of the Self

11. The Reactive: Social Experiences of Surface and Depth

is Professor of Economic Sociology and Social Theory at the Department of Management, Politics and Philosophy, Copenhagen Business School, Denmark.