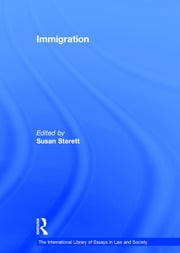 Whilst immigration policy is a highly controversial topic in the West, states continue to receive people who settle, whether as asylum-seekers or refugees, or as family members of existing migrants or labour migrants. Many who move violate the immigration rules either in entering a country or staying beyond the time allowed. The problems illegality entails for migrants shape much of the law and society scholarship in this area and this volume brings together the key articles which shape current thinking. The main topics covered include illegality, mercy and the language of deservingness; transnationality; family and identity; refugees and asylum-seekers.

Susan Sterett is a Professor in the Center for Public Administration and Policy and Director of the Metropolitan Institute at Virginia Tech. She is the editor of the collection Sociolegal Studies and Disaster, published as part of a series with the Onati International Institute for the Sociology of Law. She has also published articles in journals including Law and Social Inquiry, Comparative Political Studies, Studies in Law Politics and Society, and Studies in American Political Development.

'...succeeds in gathering together some of the best scholarly articles on law, society and migration...providing a thorough and thematically wide-ranging discussion of major issues in the study of migration regulation and law.. It represents an excellent place for students or academics seeking an overview of these issues to begin and should therefore be seen as a valuable contribution to research on both law and migration studies.' The Maghreb Review