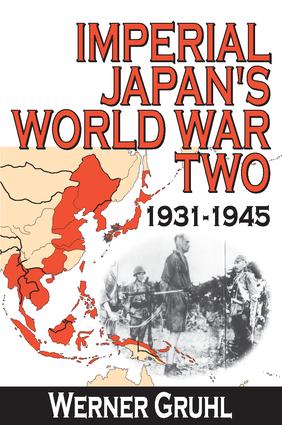 Gruhl's narrative makes clear why Japan's World War II aggression still touches deep emotions with East Asians and Western ex-prisoners of war, and why there is justifiable sensitivity to the way modern Japan has dealt with this legacy. Knowledge of the enormity of Japan's total war is also necessary to assess the United States' and her allies' policies toward Japan, and their reactions to its actions, extending from Manchuria in 1931 to Hiroshima in 1945. Gruhl takes the view that World War II started in 1931 when Japan, crowded and poor in raw materials but with a sense of military invincibility, saw empire as her salvation and invaded China.

Japan's imperial regime had volatile ambitions but limited resources, thus encouraging them to unleash a particularly brutal offensive against the peoples of Asia and surrounding ocean islands. Their 1931 to 1945 invasions and policies further added to Asia's pre-war woes, particularly in China, by badly disrupting marginal economies, leading to famines and epidemics. Altogether, the victims of Japan's World War Two aggression took many forms and were massive in number.

Gruhl offers a survey and synthesis of the historical literature and documentation, statistical data, as well as personal interviews and first-hand accounts to provide a comprehensive overview analysis. The sequence of diplomatic and military events leading to Pearl Harbor, as well as those leading to the U.S. decision to drop the atom bomb, are explored here as well as Japan's war crimes and postwar revisionist/apologist views regarding them. This book will be of intense interest to Asian specialists, and those concerned with human rights issues in a historical context.

Introduction
Acknowledgments
1. Remembrance: The Matter of Representation in World War II Historiography
2. War Victims and Statistics
3. War and Peace and Imperial Japan
4. The Stage for Tragedy: From Manchuria to China to Indochina: 1931 to 1941
5. The Expanded Stage for Tragedy: Pearl Harbor, Southeast Asia, China, and the Pacific to Hiroshima, 1941-1945
6. Violent Death in China
7. Violent Death in Southeast Asia and the Indian and Pacific Islands
8. Forced Laborers, Refugees, and Privation Victims
9. The Raped, Tortured, Prisoners, and the Horrific Total
10. Devastation
11. China's Plight and Contribution to Allied Victory
12. Responsibility for War and War Crimes
13. The Bombs of August: Hiroshima and Nagasaki in Perspective
14. Conclusion
Bibliography
Index