Implementing Lean
Twice the Output with Half the Input!

Implementing Lean: Twice the Output with Half the Input!

Everyone has heard the phrase about doing twice the work in half the time, but instead of focusing only on time, this book focuses on driving increased output with consistently less input. Implementing Lean: Twice the Output with Half the Input! teaches readers not only about Lean and its major concepts, but it drives the leader toward implementing a true Lean system.

The authors have used the methodologies in this book everywhere from hospitals to service industries to manufacturing plants in order to impact businesses by providing proven principles, techniques, and approaches that yield substantial improvement to any business, small or large, in any sector.

Learn about the benefits of implementing Lean in your company as the authors walk you through the major components as well as show you how to implement them. This guide is already being used by Lean Practitioners every day on shop floors to educate and refresh how tools are used in real-world applications.

4. Our Misguided Allegiance to the Batching Paradigm

8. Transitioning to a Lean Leader

9. Getting Ready to Implement a Lean System

Charles has over 31 years of experience in materials and operations management. He spent 13 years with AlliedSignal, now Honeywell, where he was an aerospace strategic operations manager and the first AlliedSignal Lean master. He has received numerous special-recognition and cost-reduction awards. Charles was an external consultant for DBED’s Maryland Consortium while he was with AlliedSignal. He had input into the resulting world class criteria document and assisted in the first three initial DBED world class company assessments. He is an international Lean consultant and has taught students courses in Lean principles and total quality worldwide.

Charles spent the last 18 years implementing successful Lean product line conversions, kaizen events, and administrative business system improvements (transactional Lean) across the United States. He is following in the footsteps of his grandfather, who was part of the Civil Communications Section (CCS) of the American Occupation. Prior to Deming’s 1950 visit to Japan, C.W. Protzman Sr. surveyed over 70 Japanese companies in 1948. Starting in late 1948, Homer Sarasohn and C.W. Protzman Sr. taught top executives of prominent Japanese companies an eight-week course in American participative management and quality techniques in Osaka and Tokyo. Over 5100 top Japanese executives had taken the course by 1956. Many of the lessons we taught the Japanese in 1948 are now being taught to Americans as "Lean principles." The Lean principles had their roots in the United States and date back to the early 1700s and later to Taylor, Gilbreth, and Henry Ford. The principles were refined and expanded by Shigeo Shingo and Taiichi Ohno at Toyota. Modern-day champions are Norman Bodek, Jim Womack, and Dan Jones.

Charles participated in numerous benchmarking and site visits, including a two-week trip to Japan in June 1996, where he worked with Hitachi in a kaizen event. He is a master facilitator and trainer in TQM, total quality speed, facilitation, career development, change management, benchmarking, leadership, systems thinking, high-performance work teams, team building, Myers–Briggs Styles indicator, Lean thinking, and supply chain management. He also participated in Baldridge Examiner and Six Sigma management courses. He was an assistant program manager during "Desert Storm" for the Patriot missile-to-missile fuse development and production program.

Fred Whiton, MBA, PMP, PE, has 30 years of experience in the aerospace and defense industry, which includes engineering, program and portfolio management, strategy development, and operations. He is currently employed by DRS Technical Services as a division vice president responsible for clients in seven countries at over 50 locations. Fred has both domestic and international expertise within homeland security, command and control intelligence surveillance and reconnaissance sensors and services, military and commercial aerostructures, and defense systems supporting the US Navy, US Air Force, US Army, and Department of Homeland Security (DHS) across a full range of functions from marketing, concept development, engineering, and production into life cycle sustainment and logistics. Fred began his career as a design engineer at General Dynamics, was promoted to a group engineer at Lockheed Martin, and progressed to becoming a director at Northrop Grumman within the Homeland Defense Government Systems team. As vice president of engineering and operations at Smiths Aerospace, he was the Lean champion for a Lean enterprise journey, working closely with Protzman as the Lean consultant, for a very successful Lean implementation within a union plant, including a new plant designed using Lean principles.

Fred has a BSME from the University of Maryland, an MSME from Rennselaer Polytechnic Institute, a master’s from The George Washington University, and an MBA from The University of Chicago. He is a professional engineer in the State of Maryland, is a certified project management professional (PMP), served as a commissioner on the State of Maryland Commission for Manufacturing Competiveness, served as a commissioner on the Maryland Commission on Autism, and is a member of the board of directors for multiple organizations, including the Regional Manufacturing Institute (RMI) with headquarters in Maryland. 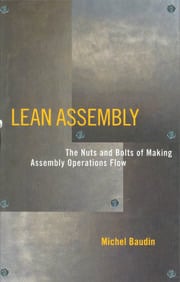