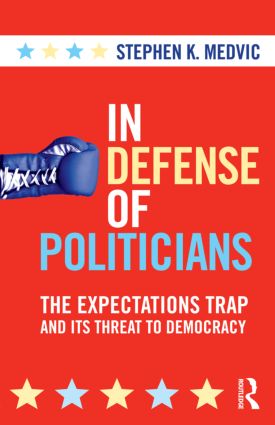 In Defense of Politicians

The Expectations Trap and Its Threat to Democracy, 1st Edition

Politicians are reviled. From jokes on late-night TV talk shows to radio show rants and from public opinion polls to ubiquitous conventional wisdom—politicians are among the most despised professional class in modern society. Drawing on seminal work in political science, Stephen K. Medvic convincingly argues to the masses that this blanket condemnation of politicians is both unfair and unwarranted. While some individual politicians certainly deserve scorn for misjudgments, moral failings, or even criminal acts, the assumption that all of them should be cast in a similar light is unjustified. More importantly, that deeply cynical assumption is dangerous to the legitimacy of a democratic system of government. Politicians, as a class, deserve respect, not out of blind obedience to authority but because democratic deliberation requires it.

Medvic explains how cognitive biases in the way people reason often lead us to draw unjustified conclusions of politicians in general based on the malfeasance of some. Scandals involving politicians are likely to be remembered and to serve as "evidence" of the belief that "they all do it." Most politicians, in fact, care deeply about their cities, states, and nation. But they face a trap of unrealistic and contradictory expectations from the public about how politicians should behave. Medvic, in turn, demonstrates the necessity of ambition, the utility of politics for resolving conflicts peacefully, and the value of ideology in framing political choices. In the end, citizens must learn to tolerate the inherent messiness of politics as the only viable alternative to violent conflict. In the process, we must embrace our role in the political system as well.

"Stephen Medvic asks an important question: Can a democracy thrive (or even survive) if  the citizenry is disdainful of elected politicians? He—and I—agree with Ben Franklin, that the health of a democracy depends as much "on the general opinion of the goodness of the Government, as [on] the wisdom and integrity of its Governors." In this provocative book, Medvic examines why Americans are cynical about those whom they elect and suggests cures for this malady facing our polity."

"Politicians are at the center of American democracy, but their lives are not simple. Medvic provides an excellent review of the many contradictory expectations imposed on them. Should they lead or respond? Should they be typical or more accomplished? Should they be principled or pragmatic? He then provides insightful examples of how these conflicting expectations play out within a system of government that seeks to limit power. This book is invaluable for those trying to understand the behavior of American politicians.

"Stephen Medvic's engaging defense of politicians argues convincingly that current political dysfunction is far more a consequence of the public's contradictory preferences, expectations, and choices, and of our cherished constitutional system, than of the leaders we elect to represent and govern us. The more widely recognized this reality, the better." —Gary C. Jacobson, UC San Diego

"This is a very accessible book that makes a compelling and timely statement about the state of our politics and what we should do about it. I can't help but think that every undergraduate in America would be well-served to read it, and have the opportunity to debate the arguments within it."

Controversies in Electoral Democracy and Representation

The Routledge series Controversies in Electoral Democracy and Representation presents cutting edge scholarship and innovative thinking on a broad range of issues relating to democratic practice and theory. An electoral democracy, to be effective, must show a strong relationship between representation and a fair open election process. Designed to foster debate and challenge assumptions about how elections and democratic representation should work, titles in the series present a strong but fair argument on topics related to elections and the institutions shaping them, voting behavior, party and media involvement, representation, and democratic theory.