In Freud's Shadow
Adler in Context 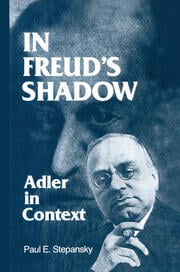 In Freud's Shadow: Adler in Context

In its detailed, interpretive reconsideration of Adler's involvement with Freud and psychoanalysis, In Freud's Shadow constitutes a seminal contribution to our historical understanding of the early psychoanalytic movement.  Making extensive use of the Minutes of the Vienna Psycho-Analytic Society, Freud's correspondence, and the diaries of Lou Andreas-Salome, Stepansky reconstructs the ambience and reanalyzes the substance of the ongoing debates about Adler's work within the psychoanalytic discussion group.  One valuable by-product of his undertaking, then, is a compelling portrait of the early Vienna Psycho-Analytic Society from the standpoint of the sociology of small groups and, more especially, of Freud's status as the "group leader" of the Society.

Thoroughly researched, meticulously documented, and brilliantly written, In Freud's Shadow: Adler in Context represents a watershed in the literature on Adler, Frued, and the history of psychoanalysis.  It will be of major interest not only to psychoanalysts, psychiatrists, and psychologists, but to social scientists, historians, and lay readers interested in the politics of scientific controversy, the sociology of small groups, and the relationship of psychology to contemporary systems of belief.

Paul E. Stepansky received his doctorate in European intellectual history from Yale University, where he was named the first Kanzer Foundation Fellow for Psychoanalytic Studies in the Humanities.  One of the foremost psychoanalytic editors in the country, he served as the Managing Director of Analytic Press until 2006.  He is the author of numerous books on Sigmund Freud as well as The Memoirs of Margaret S. Mahler.

"This remarkable book is not only a carefully researched, closely reasoned intellectual biography of Alfred Adler but also much more.  It is a major study in the much neglected field of non-partisan comparative psychoanalysis.  The author creatively integrates psychoanalytic concepts with the views of many major intellectual figures who were not themselves psychoanalysts.  The result is a provocative study of unusual breadth and multidisciplinary appeal."

"Alfred Adler has long been a victim of polemics - whether favorable or hostile - rather than the subject of study.  Paul Stepansky corrects this unfortunate situation in this appealing and well-written book; he has rescued Adler for historical science.  One need not agree with every word of Stepansky's assessment to find his book immensely illuminating.  I certainly have."

"Among the professional historians who have begun to elucidate the development of psychoanalysis, Paul Stepansky has for some years distinguished himself through his increasing intellectual mastery of the field and understanding of the cultural context in which it operates.  Stepansky's promise is now brilliantly fulfilled in this study of the career of Alfred Adler.  In Freud's Shadow illuminates the inevitable dissolution of the collaboration between Freud and his first major disciple.  Stepansky's assessment of Individual Psychology as an independent system of thought and consideration of Adler's residual influence within psychoanalysis consitute a tour de force of intellectual history.  This book is destined to become a fundamental text for students of psychoanalytic ideas."

"This book is a scholarly work, the result of meticulous research and consideration, yet it is one which makes for easy, even compulsive reading, as it is so well constructed.   It is not a biography, but rather explores the roots of Adler's thinking in his own intellectual and cultural background.  I would recommend this book highly, not only to students of psychoanalysis, but also to those interested in the psychology of groups and in the history of ideas.  It provides a particularly vivid and informative picture of aspects of one of the most productive cultures in our recent history."

"This book will displease ardent Freudians and Adlerians alike, but it sets a standard of scholarship and objectivity for the further elucidation of the development of psychoanalysis.  It is strange that the discipline which psychologically shaped our century still fights shy of its own history.  Paul Stepansky offers strong but beneficial medicine to remedy this miasma.  The relatively young author of this excellent book is to be welcomed as a serious writer in a field recently dominated by amateurism and grandstanding."