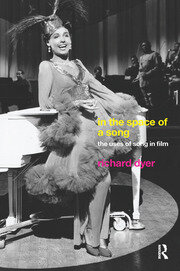 In The Space Of A Song: The Uses of Song in Film

Songs take up space and time in films. Richard Dyer's In the Space of a Song takes off from this perception, arguing that the way songs take up space indicates a great deal about the songs themselves, the nature of the feelings they present, and who is allowed to present feelings how, when and where. In the Space of a Song explores this perception through a range of examples, from classic MGM musicals to blaxploitation cinema, with the career of Lena Horne providing a turning point in the cultural dynamics of the feeling.

In the Space of a Song is ideal for both scholars and students of film studies.

Chapter 1. Introduction Something about singing; No musicals: Italian cinema; All musicals: Hindi cinema  Chapter 2. The Perfection of Meet Me in St. Louis  Chapter 3. A Star Is Born and the Construction of Authenticity  Chapter 4. ‘I Seem to Find the Happiness I Seek’: Heterosexuality and Dance in the Musical  Chapter 5. The Space of Happiness in the Musical  Chapter 6. Singing Prettily: Lena Horne in Hollywood  Chapter 7. Is Car Wash a Musical?  Chapter 8. Music and Presence in Blaxploitation Cinema

"This book offers a series of supremely detailed and insightful case studies, each illustrating what is at stake when songs are heard – and seen – in films. Dyer investigates commonplace ideas about the use of songs in film and shows how these are enacted in the detail of a particular sequence, of a single movie, across a genre or over a performer’s career. He demonstrates expertly that the coupling of song and film narrative also involves choreography in relationships of race, gender and sexuality. This ideological operation is powerful precisely because song sequences are often so enjoyable, eliciting a sense of pleasure that Dyer conveys sincerely yet critically, and that is mirrored in the easy authority with which he writes." Dr Ian Garwood, University of Glasgow, UK

"Richard Dyer has spent his career at the leading edge of helping us understand what entertainment does for us, beyond merely entertain. With this compact, engaging exploration of songs in films — from classical Hollywood musicals to 1970s Blaxploitation films, to Italian and Hindi cinema — Dyer takes us from the initial question "What does it mean?" to the deeper, more challenging, and yet more telling question "How does it mean?" Intertwining narrative, performance analysis, and social history, Dyer adds a distinctive focus by siting moments of song within geographic and temporal, as well as narrative and emotional, space. Songs can create ruptures in time and space, meld them seamlessly, set them in pointed contrast, or create fluid spaces of affect within a linear narrative. Dyer’s close readings illuminate not only individual instances but help us grasp what we already "know" - how complex even the most "natural" and "spontaneous" moments of song can be." Robynn Stilwell, Georgetown University, USA

"What a pleasure to find Richard Dyer returning to the musical! In the Space of a Song combines reprints of some older pieces with several substantive new ones in a collection of insightful essays about the double function of song and singing in the musical. Whether you study this genre or are just passionate about it, In the Space of a Song should be considered required reading. It is, simply put, Dyer at his very best." Steven Cohan, Syracuse University, USA

"In the Space of a Song...is without doubt one of the best examples of Richard Dyer's magnificent style, always characterised by placing film production in its historical context and as such, with the cultural preconceptions which shape each cinematic tradition." Teresa Fraile Prieto, translated from Secuencias. Revista de Historia del Cine