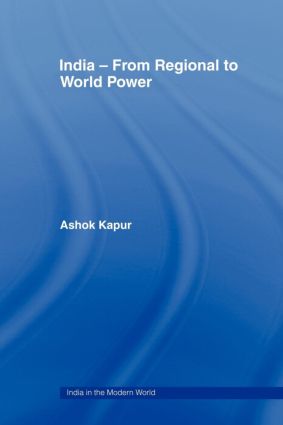 India - From Regional to World Power

This book examines the rise of India to the status of a world power capable of dealing with the full spectrum of international and regional issues in a critical part of the world. It traces the evolution of Indian diplomacy in the hands of key Indian practitioners comparing Nehru, the founder of Indian diplomacy with his successors, the Nehruvians up to 1998, and finally, Vajpayee, the leader of the BJP (1998-2004). Its main purposes are to explain the strategic and ideological context in which Indian diplomacy was framed, the character of India’s foreign policy problems, the nature and sources of its dilemmas and the paradigm shift that was orchestrated by the BJP government to reposition India in the international system and to bring it into the global strategic and economic mainstream. It shows how the approach laid down by Nehru and followed by his successors (an approach that included nuclear self-restraint, the search for friendly relations with Pakistan and China, seeking the high ground in moral and diplomatic spheres, and giving a lead to the non-aligned Third World) has been replaced by a new, more self-confident and assertive approach based on India's growing economic strength and demonstrating a more strategic and pro-Western orientation. Overall, this book provides a meticulous account of many steps post-Nehruvian India has taken to make it a rising world influence and a mature, independent power.

'This book examines the rise of India to the status of world power. It traces the evolution of Indian diplomacy in the hands of key Indian practitioners, comparing Nehru, the founder of Indian diplomacy with his successors.' - Oxfam Development Resources Review

1. Introduction: India as a Catalyst 2. Shifts in Indian Diplomatic History 3. Strategic Triangles and the Indian Subcontinent 4. Indian Strategic Debates and Dilemmas: Analytical Constructs 5. Nature of India’s Foreign Policy: Utopia, Compromise Pease or Engagement? 6. The Build-up of the Suzerain States’ System in the Subcontinent, 1947 – 1990s 7. The Typology of Threats to India and The Nehruvian Record, 1964-98 8. Nehru’s Innovations and Their Problems 9. Nehruvians and the Rise of Anti-India Trends in Foreign Affairs 10. The External Determinants of Change in Indian Foreign Affairs, 1960s – 1990s 11. India’s Antagonists Re-Group, 1971-1980s 12. Liberating India and Its Nuclear Policy From the Nehruvian Shackles 13. India’s Rise as a Major Power, 1990s 14. BJP’s Geopolitics and Building Strategic Triangularities Epilogue

Ashok Kapur is Professor of Political Science at the University of Waterloo. He specializes in South Asian diplomatic and strategic issues including nuclear weapons and missile proliferation as well as regional security structures in Asia. Born in Lahore, he grew up in Shimla and did his advanced graduate work in Washington, DC and Ottawa.

India in the Modern World