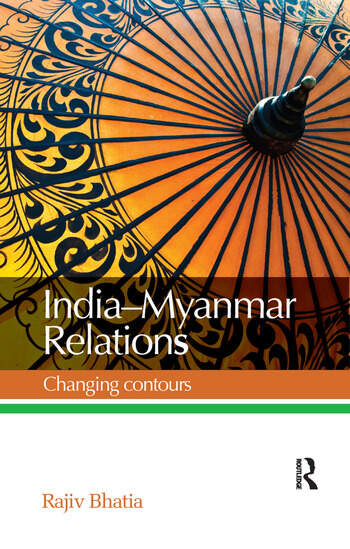 This book provides a comprehensive evaluation of India's multi-faceted relations with Myanmar. It unravels the mysteries of the complex polity of Myanmar as it undergoes transition through democracy after long military rule. Based on meticulous research and understanding, the volume traces the trajectory of India–Myanmar associations from ancient times to the present day, and offers a fascinating story in the backdrop of the region’s geopolitics. An in-depth analysis of ‘India–Myanmar–China Triangle’ brings out the strategic stakes involved.

It will be of great interest to researchers and scholars of international relations, peace and conflict studies, defence and strategic studies, politics, South and Southeast Asian studies, as well as policy-makers and political think tanks.

Rajiv Bhatia served as Director General of the Indian Council of World Affairs (ICWA), New Delhi, India, and is former Ambassador to Myanmar. He is a distinguished former diplomat, an active figure in India’s strategic community and a prolific commentator on foreign policy. As Director General, he imparted considerable dynamism to the ICWA, a premier think tank on international affairs. He was Senior Visiting Fellow at the Institute of Southeast Asian Studies (ISEAS), Singapore, during 2011–13. As India’s ambassador to Myanmar from 2002–05, he had a ringside view of developments in the region. He has published over 125 articles in newspapers and journals and has a rich experience of Track-II dialogue and diplomacy.

“This book is timely…it will serve to be a useful reference volume for students, policy makers and the public at large.” — Mr. M. Hamid Ansari, Vice President of India

"Ambassador Bhatia presents the story of India–Myanmar relations with a rare blend of lucidity, vision and empathy."

"As Myanmar continues its rapid process of change, India–Myanmar relations are an important part of political and economic dynamics. Anyone interested in developments in Myanmar should be interested in this timely and relevant book."

“…a very timely and valuable addition to the emerging corpus of literature on Myanmar.” — Shyam Saran, former Foreign Secretary

“If the author had presented it as his PhD thesis to the University of Yangon, he would certainly have been awarded a doctorate!” — Dr. Khin Maung Nyunt, a celebrated Myanmar academic

“[The book offers] a ringside view and is very, very good.” — Kavi Chongkittavorn, a well-known Thai academic and commentator

"...this book is a timely and a treasured addition to the topical theme of 'Changing Contours' between India-Myanmar relations and unique in providing an Indian perspective on the country.  [...] Describing various critical junctures and fault-lines in the political history of Myanmar and given the troika of challenges the country faces today...this book would be useful for researchers, scholars of international relations and area studies programme as well as to policy makers, strategic think tanks and for all Myanmar watchers in general.  The book would also provide a point of reference for future scholarship and writings on India-Myanmar relations."
Sonu Trivedi, Book Review
The Global New Light of Myanmar, 9 October 2015

"The book, timed to coincide with Myanmar's historic November 8 elections whose results are due towards the month-end, is a handy guide to navigating a high-priority spot in India's worldview."

"The title may not be fancy but ambassador Rajiv Bhatia’s book, India-Myanmar Relations: Changing Contours, but its content far exceeds expectations. It has not only turned out to be a defining book on India-Myanmar relations, it also offers a rich narrative on the shared history of the two southeast Asian neighbours, and Myanmar’s shaking off of its colonial past and evolution as a nation-state."

"As a former ambassador to Myanmar, Bhatia is uniquely suited to provide a better understanding of Myanmar, its internal dynamics and of India’s relations with it at this interesting time...Myanmar scholars can expect much—facts, sound analysis and supportive evidence."
V.S. Seshadri, Outlook magazine, December 2015

"The book will be of interest not only to students of international relations and diplomats but also to the general public in India, Myanmar, and the wider India-Pacific region...Rajiv Bhatia has made a significant contribution to our knowledge of the East." - K.P. Fabian, Frontline magazine, Print edition : January 22, 2016

"By approaching the subject of India–Myanmar relations from various perspectives—historical, political, economic and cultural—the author has been able to bring out the multi-dimensional nature of the relationship. In his work he is able to establish a valuable connection between Myanmar’s domestic and foreign policy, the regional with the global. This book can be profitably consulted by scholar and practitioner alike and will be a valuable addition to any library." - Udai Bhanu Singh, Strategic Analysis (2016) 40:1, 67-68

"[The book] with its meticulous research and presentations could well become a text book on Myanmar for many...Rajiv Bhatia’s book will hopefully encourage more members of the Foreign Service to join the small group that seeks to bring to India and the world the fascinating realities of the countries in which they served." - Eric Gonsalves, Former Secretary, Ministry of External Affairs, Former Ambassador of India to Japan, Belgium, the EEC and Luxembourg, Indian Foreign Affairs Journal   Vol. 11, No. 1,  January - March 2016

"This book is an authoritative introduction to a neighbouring country that will only grow in importance." - Krishnan Srinivasan, India's former Foreign Secretary, Jan 2016, The Statesman

"For scholars and practitioners interested in India’s neighbourhood and India’s Act East policy, this book is a must read. For activists who are working on promoting democracy, the book will provide interesting and useful insights." - Sanjay Pulipaka, Senior Consultant, ICRIER, South Asia Economic Journal, 17(1) 1–2

"Ambassador Bhatia’s tenure as the head of the division dealing with Myanmar in the Ministry of External Affairs, his subsequent role as India’s Ambassador in Yangon, and his frequent interactions as Director General, Indian Council of World Affairs, with the leadership in Myanmar have given him a unique perspective on bilateral relations, and his book is rich in detail and perceptive in its analysis." - Meera Kumar, Gateway House: Indian Council on Global Relations, 30 March 2016 website